Evan Klein, also known under many different aliases, is a 9th generation Malkavian resident of Chicago, who suffers from a severe Multiple Personality Disorder.

Most people meet Evan Klein under the moniker of Raymond Falcon, who is the bassist of the Chicago punk band known as Baby Chorus. However, the young vampire changes his personality in a mercurial way to respond to those he meets, resulting in a multitude of contacts and friends who have no idea they are dealing with a madman.

The original personality of Evan Klein created his alternate personas as a means to insulate himself from the abuses he suffered from his father during childhood. His insanity came to the notice of Jason "Son" Newberry, who felt delighted to explore the numerous personalities within Evan's mind to such an extent he petitioned Prince Lodin to Embrace the man.

Ever since Evan Klein shared the blood of Malkav, it has multiplied his various personalities even further than before. His newest persona presented during the conflict between Lupines and Cainites known as the "War of Chicago". Evan believed himself to be one of the werewolves so strongly that, against all odds, he managed to fool the Lupines themselves. They left him alone during one of their most vicious attacks – an occasion in which two of his Kindred bandmates met their Final Deaths. 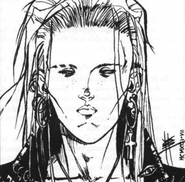 Retrieved from "https://whitewolf.fandom.com/wiki/Evan_Klein?oldid=220852"
Community content is available under CC-BY-SA unless otherwise noted.