none (Tremere through adoption)

Councilor of Eastern Europe in the Inner Council of Seven

Etrius, also known as the First Among Equals, is a 4th generation elder of Clan Tremere and an adopted childe and apprentice of Tremere himself. Etrius remains one of the most faithful disciples of the slumbering Antediluvian, occupying a seat on the Inner Council of Seven as Councilor of Eastern Europe. In additions to being on the Council of Seven, according to the VTES expansion Dark Sovereigns continuity he also represents Clan Tremere on the Camarilla Inner Circle.

Etrius was born in 850 CE near what is now the city of Gothenburg in what is now Sweden. His father served Ansgar, the German bishop who made the first Christian mission to the area. Upon his conversion, he changed his name from the pagan Ingvar to the Christian Etrius. Young and very pious, although not humble or otherwise well-versed in Christian virtues, Etrius was sent on a pilgrimage to Rome, but his party was attacked and Etrius was taken as a slave.

In Constantinople, he was sold to someone who sensed his special talents for magic, a man called Tremere. Despite Etrius' sermons about God and the Church, Tremere began to tutor the young man in the Hermetic arts. The young man's arrogance grew as he magically outlived his peers, blustering himself into a state of divine absolution and of Tremere's favorite apprentice.

His only rival for the favor of his master was Goratrix, a man he immediately despised after meeting him. Etrius was responsible for establishing the Vienna Chantry and was nominally the head of it, although he seldom remained there. He was also present when Goratrix consecrated Ceoris, criticizing him for the construction and spending too much time at the Chantry. When the arcane arts of the Order of Hermes began to fail them and endangered their immortality (a fact that Etrius proved, much to Goratrix's dismay), the mages of House Tremere began to search desperately for means of averting the decline of magic and maintaining their immortality.

Etrius even dabbled in infernalism, something that backfired horribly and set loose a demon that cost him much favor in Tremere's eyes. When Goratrix surpassed him by discovering the potion that would turn him and the others into vampires, Etrius objected at first, although this sentiment would not last (in the Modern Nights, he claims to be the one who invented the potion).

In the following infiltration of the Hermetic House, he advised caution and secrecy (in contrast to Goratrix) and accompanied Tremere in his studies across medieval Europe to learn more about vampiric history, codifying the hermetic arts into Thaumaturgy. He was also responsible for leading Tremere to Saulot's resting place, witnessing the diablerie of the Antediluvian firsthand, and diablerising many Salubri elders himself. After Tremere entered torpor, Etrius was responsible for much of the structure of the Pyramid and the Code of Tremere, shaping the Clan and leading him to the Camarilla.

In 1525 CE Etrius diablerized the last known childe of Saulot, the Japanese Mokur, a founding member of the Inconnu. He appears to have realized, at the last moment, that this act mirrored that of Tremere diablerizing Saulot and that this was a bad portent. Some might take this as another indication that Saulot and the Salubri have secretly been in control of the Tremere clan for centuries.

In modern nights, Etrius watches over Tremere's sleeping body in the Vienna Chantry and protects him from potential assassins of the many enemies the Clan has. He has aided his master in possessing Goratrix's body and even acted as a temporal vessel for his sire's soul.

In V5 it is unknown if Etrius managed to survive the Second Inquisition's raid of the Vienna Chantry in 2008, with presumably destruction of the Inner Council of Seven.

Standing 5'6" tall and of average weight, Etrius has long, tawny blonde hair and blue eyes. His face is slightly rounded. He prefers to wear the robes of a mage and never removes a golden chain with a blood-red stone set into a medallion given to him by Tremere when he first became a master magus. 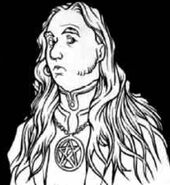 From Vampire: the Masquerade - Redemption 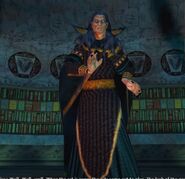