Erichtho, born as Tracy Greaves, is a Tremere vampire Embraced in 1897 CE, who is active among the Anarchs of the Chicago area.

During her lifetime Tracy has been an amateur occultist and Jewish mysticismTheosophist who lived in her father's house in Chicago. Nicolai Antonescu, the city's Tremere primogen, became infatuated with her and, with Prince Lodin's permission, sought to woo her that he might Embrace her. However, his amorous overtures failed thanks to his perpetually childlike appearance, so he resorted to a more occult tactic. He revealed himself to her as a magical being and offered her to join him in immortality. She accepted, believing him to be one of the otherworldly Secret Masters of Theosophist mythology – and thus, after her Embrace, she was horrified to learn that she had instead become undead, and attempted to kill herself.

Nicolai fed her his vitae a second time to heal her, Dominated her to prevent her from attempting suicide again, and prepared to present her to the Pyramid in Vienna. However, during the journey, she managed to throw off her sire's control and again attempted to kill herself. Nicolai fed her his vitae for the third time that she might heal, permanently enforcing a blood bond onto her despite the fact that she was meant to be bound to the clan elders. Thus, he was forced to conceal her in his chantry to hide his crime from the clan. He freed her a decade later, commanding her not to endanger either her own life or the Masquerade. She fled Chicago, wandering Europe for years before returning to the city where she had lived and died.

On her return, she befriended the Anarch leader Maldavis and was crushed when her ally's uprising failed in the 1960s. Both she and her sire survived the War of Chicago. She subsequently became quite leery of Nicolai's fawning relationship with the neonate "Portia" (actually the methuselah Helena, who had utterly enthralled him). For all her resentment of her sire and her hatred of what he did to her, she still cares for him, if only because of the blood bond, and thus she is investigating "Portia" and her activities in the modern nights.

Erichtho maintains a haven in a mansion in Wilmette, where she has enlisted a pair of minor ghosts to her service. (This association appears to be voluntary on the part of the spirits, as she knows no Necromancy and has but one ritual that can speak with spirits but cannot compel them.) She also maintains connections with both Anarchs and a mortal mage of "the Old Order", who would likely be quite surprised to learn of her undead nature.

Path of Blood 4, Spirit Manipulation 4, Lure of Flames 3, Movement of the Mind 2 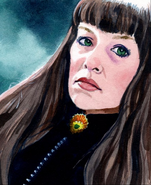 Erichtho from Chicago by Night - V5

Erichtho VTES card. Art by Lawrence Snelly
Add a photo to this gallery

Retrieved from "https://whitewolf.fandom.com/wiki/Erichtho?oldid=220153"
Community content is available under CC-BY-SA unless otherwise noted.