Elsa Linden was a 7th generation Toreador active in New England. She is an enemy of the influence of the British occupants.

In her lifetime, Linden was a talented composer, but thanks to her gender, word of her talent spread only in salons held by her parents. During one of these salons, she made the acquaintance of her future sire and grandsire. Both decided that such talent should not go to waste and took her under their wing.

The trio traveled through New England, until Annabelle and Maria decided to leave for Chicago. Linden refused, instead assuming the princedom of Manchester, Vermont in 1890, much to her sire's relief, who had slowly become jealous of her talent. Since Manchester had no native Cainite population, Linden could exert her influence without supernatural hindrance and slowly guided the city to become more receptive to the arts. Her rule became first contested in 1895, when the Sabbat first attacked the Camarilla holdings of New England and the local Lupine population became more and more aggressive. In 1896, Linden was forced to flee to Massachusetts, where she established a small artist colony.

During Operation: Longbow, Linden was ignored, for the British vampires did not see her as a threat. Both clashed first when William Biltmore accidentally destroyed a Delacroix painting under her care, which ruined her reputation among the more influential members of her clan. Vengeful, Linden began to support the Kindred of Liberty. She acts as an ally to Quentin King III and had friendly relations with the Giovanni of Boston. She also continued to compose, under a pseudonym, and such had a standing among the local musician scene. 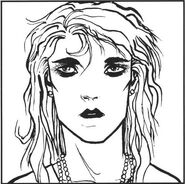 From Dark Colony
Add a photo to this gallery

Retrieved from "https://whitewolf.fandom.com/wiki/Elsa_Linden?oldid=212622"
Community content is available under CC-BY-SA unless otherwise noted.