Elias the Whale is a bloated Nosferatu antitribu whose domains are the sewers of Montréal. He is part of the Wretched coven of the Montréal Sabbat.

Apparently obese when he was mortal, Elias has spent much of his unlife underwater, becoming even more bloated and deadly pale. The Crucible has only increased his size and given him webbed hands and extended feet like a seal. Elias' form is so huge that he must use Potence to walk upright.

Master of the sewers of Montréal, Elias the Whale is the bloated king of dank and vile realm. Embraced in 1967, Elias made the sewers and rivers of Montréal his home, and remained largely an outsider to the sect until Sangris recruited him for his pack of snake-hunters.

After the destruction of Jérar, Elias came to realize that there was more to know about himself and his world, and embarked on the Path of Caine. He came to feel that the true nature of Caine's progeny hid under layers of habit and humanity – layers that had to be stripped away.

Elias found a kindred spirit in Stéphanie L'Heureux, and the two formed the Wretched to pursue their goals. Elias has amassed a wealth of knowledge from secret sources and has contributed several important finds to the Librarians' collection.

Elias and the Shepherd Sabrina have recently began a twisted courtship, and Elias is more than happy to use her to gain access to the Shepherds secrets. Elias also has followed Muse about as she sings in the underbelly of Montréal, and he found out that the feral creatures that live under Mount Royal seems to obey her. 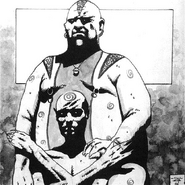 Elias and Spider from Montreal by Night. Art by Christopher Shy
Add a photo to this gallery

Retrieved from "https://whitewolf.fandom.com/wiki/Elias_the_Whale?oldid=209395"
Community content is available under CC-BY-SA unless otherwise noted.