Edward Neally is an 8th generation Ventrue of Chicago, a childe of Prince Lodin.

Neally’s was a pained childhood, abandoned at St. Patrick’s when his parents realized they couldn’t afford to raise him, schooled by nuns and priests who taught him a lot about guilt but not much about joy. His luck changed when a public servant investigating St. Patrick’s found the canny lad a willing source of information on the school’s scandals. The eventual Senator John Logan took Neally into his home and eventually Logan’s affection grew. He never publicly acknowledged his adoption of the boy, records tonight only showing Edward Neally’s service in the house scullery, but Neally spent all his time advising the politician, becoming his chief of staff in later years.

Neally befriended a fellow young man in the employ of politicians by the name of Jefferson, at this time. The two exchanged partners and even carried out a clandestine affair with each other for a time, Neally only breaking off their union when the guilt grew too much to bear.

Neally found you can’t just shut away a childhood of abuse. As he eventually went on to tell many a traumatized vessel, “closure does not exist.” For every success came the wash of guilt. For every profit came the wages of sin. Neally was not religious, but associated every pleasure with self-loathing. In fits of pique he tore apart his wardrobe for his self-perceived “poor taste.” He had sex and felt he wasn’t good enough. He masturbated and felt physically revolted that he’d put himself through such onanism.

Despite all this, Neally was a highly successful administrator and counsel in mortal politics. The greatest rush came when he accompanied his father figure to Washington. He put aside his feelings of unworthiness, at least until another staffer called him a “jumped-up bog-trotter.” That night, Neally took his first opium hit. He enjoyed it. It diminished his self-hatred. He took it again the week after. It didn’t take long for the drug to cloud his judgement and for Logan to quietly secrete Neally in an institution.

Lodin had long followed Neally’s career and decided he was well-equipped to serve as seneschal. Neally didn’t fully understand the offer. He accompanied the prince on a tour of Chicago and its underbelly, meeting vampires and finding out about Camarilla politics. Lodin Embraced him before he could say “yes.”

Neally disappeared from Senator Logan’s life, but continued to send the elderly mortal regular packets of money. When Logan died, Neally lost an anchor, and the tear in his soul was intense. Neally Embraced Jefferson to fill the hole, but in so doing made a long-term enemy as the two dueled over influence and the love of a ghoul named Emily.

It was in the early 1990s when Neally’s spirit took its biggest hit. Under the influence of a manipulative Jefferson, Neally frenzied, murdering a swathe of kine, including his treasured ghoul Emily. Lodin was furious that his seneschal had caused several blatant Masquerade breaches and would have destroyed Neally himself had the Sabbat not ferried him away.

The Sabbat poured words into his head about ancient elders controlling him and wanting to devour him. They told him Lodin was just using him. They assured him he was worthless and sin in human form. Such rites were similar for many Sabbat inductees, but usually came accompanied with the reassurance that despite all that, the vampire had a home and love from the Sabbat. Jefferson, who led the Sabbat pack, forbade such lovebombing. Instead, he turned Neally and his pack loose on Chicago as saboteurs, using Neally’s knowledge of the city to destabilize it, assassinating prominent Kindred such as the Caitiff hero Dickie Fulcher at the Sabbat’s behest.

When many members of the Sabbat migrated on their Gehenna Crusade, the bond with Jefferson’s pack snapped. He was free. He was in Chicago, a known Sabbat agent provocateur, but now he wanted in with the Camarilla. The first thing he did was tell the primogen council about all the Sabbat nests in their domains in exchange for sanctuary.

Once again, Neally has to start from the bottom.

Edward Neally reverses his name to Neally Edwards to avoid casual scrutiny, but his strongest mask comes in the form of Theodore Logan, a low-level city functionary registered as an office worker on long-term sick leave. The role provides a meager income and little intrusion into his life, while providing him a pass to enter civic buildings when needed.   Tall, slender, with a narrow face and feline-like eyes, Neally’s a moderately attractive male who appears to be in his mid-30s. He allows the thinness of his hair to show or shaves the top of his head each night, just leaving a sandy-colored horseshoe around the sides.   Neally wears off-the-rack suits, his fortunes low since the ‘80s and ‘90s, but he keeps his shoes at a high shine, abiding by the maxim that “a man cannot be trusted if he doesn’t shine his own shoes.” After years of living among the Sabbat, he has forgotten many basic human traits, such as pretending to breathe, blinking, or even stimulating the vitae to work around his system.

Must feed from opiate addicts 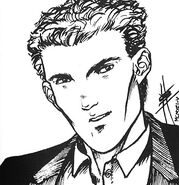 Retrieved from "https://whitewolf.fandom.com/wiki/Edward_Neally?oldid=240820"
Community content is available under CC-BY-SA unless otherwise noted.