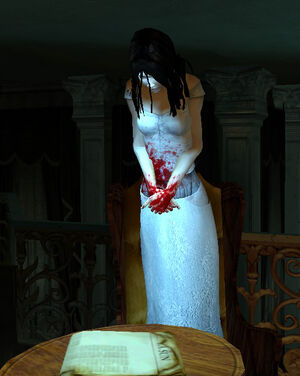 Ed's Wife (her own name is not given) is one of the ghosts haunting the Ocean House Hotel in Santa Monica.

In 1958, she and her family took a vacation at the hotel to celebrate its grand opening. During the trip, she wore a locket given to her by her mother. Over the course of a week, her husband Ed became increasingly unstable, and accused his wife of infidelity, claiming the locket was in fact a gift from her lover. On June 5 he murdered her and the children and then set fire to the hotel.

Ed's Wife became a ghost haunting the hotel's ruins, fettered to her locket. In 2004, Therese Voerman hired a fledgeling to investigate the haunted hotel, and was able to use the locket to free the ghost.

In VTM: Vampire: The Masquerade - Bloodlines , her diary and several newspaper articles about the murder can be found in the Ocean House Hotel, along with the locket..

Retrieved from "https://whitewolf.fandom.com/wiki/Ed%27s_wife?oldid=265693"
Community content is available under CC-BY-SA unless otherwise noted.