The Eater, also known as the Word-Eater, was one of the first childer of Malkav.

According to Clan legend, the Eater sustains himself not with blood, but with True Names, feeding over the platonic existences in order to incorporate other beings into himself.

It is said that he devoured his own name first and is forced to feast on other existences in a form of vampirism that is more severe than the curse levied by God on Caine.

The Eater is a mere rumor in the Modern Nights, but his presence can still be felt deep within the Madness Network. Most who know of him prefer not to talk about the topic, believing that this will attract his attention. 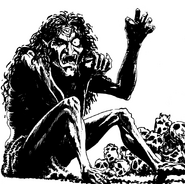 From Clanbook: Malkavian
Add a photo to this gallery

Retrieved from "https://whitewolf.fandom.com/wiki/Eater?oldid=209561"
Community content is available under CC-BY-SA unless otherwise noted.