Between 7th and 5th (see below)

Durga Syn, born Synovea, is a Ravnos elder renowned for her powers of prophecy. She frequently acts as a mentor to neonates and coteries, often while disguising herself as a mortal or a ghoul. She was an avowed foe of the Nosferatu methuselah Baba Yaga until the ancient was destroyed.

A native of the lands of Russia not long before the arrival of Christianity, Durga Syn was a shaman in the cult of a Mother Goddess. Her people and their lands came under assault from Baba Yaga, who had degenerated into madness and cruelty.

The ancient hag offered Durga Syn immortality in exchange for her servitude, but was rejected. Angered, the hag laid a curse on Durga Syn that gave her an aged and weakened appearance, and laid another curse on Russia itself before she withdrew. Soon, as magic began to fade from the world, the first Christian missionaries came to Durga Syn's people with the intent of converting them by any means necessary.

In a battle with these missionaries, Durga Syn was fatally wounded, and Baba Yaga returned to her with the intent of Embracing her. However, Baba Yaga had other foes: a tribe of Ravnos, who created an illusion of an attacking Christian army as they stole Durga away and Embraced her against her will. Baba Yaga soon fell into torpor, apparently weakened by the fading power of magic. Durga Syn, however, remained active in the world of Cainites, where her powers of prophecy garnered her great renown.

In 1444, she first encountered a coterie of fledglings called the Children of Isaac and became a guardian angel of sorts over the centuries that followed. She subsequently traveled to Transylvania, where she advised both Vlad Dracul and his notorious son, Vlad Dracula. Both Durga Syn and a Transylvanian coterie were later present for the Convention of Thorns in England; there, Durga urged the assembled vampires to find a third way, avoiding both the tyranny of the elders and the shadowy manipulation of the Camarilla in favor of simply leaving mortals to themselves. Durga returned to Romania, where she Embraced a strange youth in 1752; he took the name Zlato in homage of the gypsies he had followed in life.

In 1991, Baba Yaga awoke from her slumber and sealed Russia off from the rest of the supernatural world with the mystical Shadow Curtain. During the years that followed, Durga Syn remained the most powerful active vampire in Russia who was not in the service of Baba Yaga. Ultimately, the hag was destroyed by a Nictuku in 1998; the Shadow Curtain was sundered, albeit not entirely eliminated, and Baba Yaga's forces were destroyed or driven out by Lupines and other creatures of the night.

Durga Syn and her brood were barely touched by the madness that gripped the clan following the destruction of the Ravnos Antediluvian during 1999's Week of Nightmares, likely because of the lingering effects of the Shadow Curtain. Despite this protection, her own childe had to stake her during the worst of the madness to prevent her from harming herself or others. She strongly suspects that deaths of the Ravnos Antediluvian and of Baba Yaga were linked, and fears that the Nosferatu Antediluvian may be involved.

Durga Syn is now one of the few surviving Ravnos elders, and is one of the lowest-generation Ravnos to remain active in the Final Nights.

According to Rage Across Russia, Durga Syn would be a 7th generation vampire, childe of an unknown cainite in 923.

An earlier book, Children of the Inquisition, says nothing about her generation, but it mentions the term "Rodina" starting with a capital "R", which was interpreted by some as the name of her sire. This interpretation is most likely inaccurate, since the word "Rodina" is merely a Bulgarian/Russian term that means "homeland" or, alternatively, a Czech term that means "family" – fitting the context of the story perfectly.

Other books like the Transylvania Chronicles and Nights of Prophecy describe her as a 6th generation vampire sired by Vladovos at an unknown date, speculating that she became a Cainite around 200. The discrepancy between these books could be easily explained if, at some point after the events of Rage Across Russia, she managed to diablerized a lower generation elder vampire.

However, the whole controversy around Durga Syn's generation resides around two publications that are inconsistent with the previously mentioned books. The first is Giovanni Chronicles I, where she is listed as a 5th generation vampire Embraced in 932 by an unknown vampire. The second is Encyclopaedia Vampirica, where she is also listed as a 5th generation vampire sired by a methuselah named Rodina in 922. It should be noted, however, that her entry in the Encyclopaedia holds considerably less credibility than other sources, given that it was a book written in character, containing the author's viewpoint about vampiric society and history. 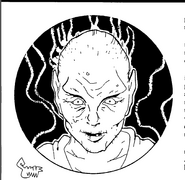 From Rage Across Russia. Art by Dan Smith

From Giovanni Chronicles I. Art by Darryl Elliott 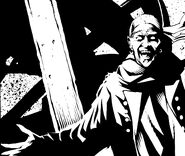 Retrieved from "https://whitewolf.fandom.com/wiki/Durga_Syn?oldid=212758"
Community content is available under CC-BY-SA unless otherwise noted.