Duke Dray is a Seelie Sidhe Grump of House Gwydion.

To most Kithain (commoners and noble), Duke Dray is a twopenny joke; a comic-opera villain who twirls his mustache and curses vainly as yet another scheme is foiled. In short, he is considered a laughingstock, despite his political power. Duke Dray would not have it any other way. The duke is his own lightning rod, a past master of political sleight-of-hand and ten-times-removed intrigue. For every minor, though well-publicized, setback encountered at the hands of the Cat's Cradle or the Red Branch (or that intrepid band of player characters), Dray's plans move forward two steps. He is widely thought to be Unseelie, perhaps a member of the Shadow Court. This perception is one of the greatest misconceptions in Concordian politics. The duke is fanatically Seelie, so much so that he has little in common with any other Seelie fae.

Dray is one of the Harbingers of Spring. He seeks to precipitate the coming Winter through the unbalanced imposition of Seelie power over all fae. To this end, his founding of and membership in the Beltaine Blade are just further diversions. The blood of high kings runs in Dray's veins (he was King Dafyll's cousin) and he is old, even by sidhe standards. In addition to his political mastery, Dray is a supremely powerful sorcerer. He possesses Arts lost even to the greatest of fae scholars. He is particularly potent in the Arts of Sovereign, Chronos and Dream-Craft. He possesses a freehold in the Far Dreaming. To Dray, any means justify his ends. He, thus, has allies of many persuasions, including Unseelie fae. One of his most recent and potent allies is Lady Alexandria, a powerful sorceress in her own right, and one of Lord Dyfell's assassins. Dray takes a particular delight in matching wits with the Ranter leader, Ravachol.

There is no mistaking that the conniving Duke Dray is a Gwydion sidhe; he's the very model of all the house's worst traits magnified. He is arrogant beyond compare, utterly convinced of the rightness of his quest, and intolerant of anyone who dares to criticize him. If anything, he is an example of what it is to be too Seelie. His obsession with bringing about Spring once more has led him into very questionable intrigues. Many nobles dismiss him as a ridiculous posturer of a theatrical villain, even assuming him to be Unseelie. This is a mistake, for he has all the courage of his house, a sorcerous talent almost unrivaled, and a head for intrigue that the lords of Eiluned would envy. 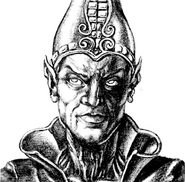 Retrieved from "https://whitewolf.fandom.com/wiki/Dray_(CTD)?oldid=210800"
Community content is available under CC-BY-SA unless otherwise noted.