Inconnu (formerly)
Vlad III Dracula, also known as Dracula or Vlad Țepeș ("Vlad the Impaler"), is a powerful Tzimisce elder. During his mortal lifetime, he was a resourceful and cruel prince of Wallachia; late in life, he forced or persuaded the Tzimisce noble Lambach Ruthven to Embrace him, and he has worked in the shadows of Kindred society ever since. Owner of the legendary Sword of Dracula, his favorite ghoul was Renfield.

Though historical records indicate that Vlad Țepeș died in 1476, he had been drinking the blood of a vampire that he captured and locked away in Castle Dracula. Originally of the Basarab family, he knew of the hidden masters of the Carpathian lands (thanks in part to the tutelage of the Ravnos oracle Durga Syn) and sought to gain their power.

Later, Dracula came under the guidance of Count Rustovich and Count Radu, two of the most influential figures among the Cainites of Transylvania. For years, Dracula's thirst for vitae would allow him to live on as an independent ghoul,[1] though he was curiously immune to the Blood Oath. Later, he established a haven in Poenari Castle, and from there he sought out a sponsor – or victim – who could grant him the Embrace.

His first choice as a potential sire was Yorak, the Tzimisce clan's voivode of voivodes and master of the Cathedral of Flesh. As Dracula stepped into the Cathedral and fell under Yorak's mental domination, the Cathedral's dormant will began to awaken; as Yorak's fangs spilled the first drop of Dracula's blood onto the floor, the Cathedral sensed the forces of destiny at work around Dracula and, wrenching itself free of its master's will, devoured Yorak whole. Dracula narrowly escaped from the Cathedral alive, his desire to gain the Embrace on his own terms redoubled.

When the elder Lambach sent a neonate Tzimisce spy to watch over Vlad, Dracula enacted a scheme to exploit them both and finally gain the Embrace that he had long sought.

In 1495, he captured Lambach's spy and became aware of a pending assault by a group of vampires called "a Sabbat". Soon thereafter, a messenger reports with a voice filled with horror and awe saying that a war party headed towards the castle, and that they seemed to possess supernatural strength and quickness. He called them monsters, saying that he had seen their blood-red eyes and hideous fangs, adding that he had heard only the names Lambach and Tabak mentioned in connection with the group and assumes that these two are the leaders of the band.

Their enmity toward Dracula stemmed from his practice of capturing Tzimisce vampires by impaling them and drinking their potent blood before destroying them. Additionally, the Tzimisce favored the Danesti claimant to the throne of Wallachia rather than Dracula, and plotted against him while he ruled.

The following evening on the small plateau at the crest of the mountain, a Sabbat pack consisting of ten vampires arrived. Soon after, a second group of vampires joined the fray, ambushing the Sabbat as it completed its ascent of the stairs leading up to the castle while Dracula's forces were conspicuously absent.

Warned far in advance of his "messenger's" arrival that a pack of slavering anarchs were coming to kill him, Dracula sent secret messages to the Justicars informing them where they could find the "Sabbat". After waiting for the Justicars to do much of his work for him, Dracula planned to swoop down, destroy the Justicars and take the Sabbat for his own use.

The Camarilla Kindred were comprised of two Justicars (Mistress Fanchon and Milov Petrenkov) and six Archons led by Lucita de Aragón. In battle, the Camarilla vampires clearly had the advantage over the poorly organized Sabbat. As the mortals watched, three of the Sabbat pack went down under the disciplined assault by the battle-hardened Archons. The Gangrel Justicar proved particularly formidable in combat and brought down another member of the Sabbat, rending that unfortunate individual in half with his claws.

Without warning, Dracula's forces rode out from the castle, swinging their mounts around to assail the Camarilla's forces from the flank. The battle changed course almost immediately, as the Sabbat enjoyed an unexpected reprieve. Dracula lived up to his reputation as a ruthless and skilled warrior as he severed heads, lopped off arms and legs and used his steed to trample his enemies where they fell. Although the Justicars and Lucita escaped the carnage, fleeing from the battle after it became clear that they had no hope of surviving otherwise, the rest of the Camarilla's forces fell to Dracula and his troops. Two of the Sabbat, Lambach and Tabak, were literally run through with wooden pikes and carried, immobilized but still conscious, into the castle.

Vlad had managed to escape the manipulation of the Tzimisce and held onto his throne through Lambach's apparent incompetence. His vampire prisoner was one of Lambach's spies, but now Dracula had Lambach and his more potent pack leader, his sire Tabak. Two nights after the battle, Dracula gave Lambach a choice: Embrace him and forswear any further contact, or die. The cowardly Lambach agreed.

Watched over by a few faithful servants, Dracula forced Lambach to Embrace him. Dracula then turned on the defenseless Sabbat pack leader and diablerized Tabak as the wily Durga Syn had told him. Interestingly, Dracula remained true to his word, allowing Lambach to go free but threatening him to never challenge him.[1]

Dracula then retreated to Birkau Castle, near Bistrița. Enlisting Count Radu's aid, he forced the Tzimisce anarchs into submission. After convincing them to enter the bonds of Vaulderie with him, he led them on nightly crusades across northern Transylvania. His first nocturnal crusade achieved some nominal unity for the Tzimisce anarchs, allowing him to become the first Tzimisce voivode of the Transylvanian Sabbat.

In the years that followed, Dracula played the Sabbat and Camarilla against each other, just as his father betrayed Sultan Murad to aid Emperor Sigismund. He mastered the ritae of koldun sorcery, even as he uncovered the secrets of Thaumaturgy. As one of Caine's childer, he broke all the rules of vampiric society, becoming a master of temporal power and mystical accomplishment. In 1897, he manipulated Bram Stoker into publishing a novel based on his own unlife, breaking the Masquerade more flagrantly than any other vampire to date. Since that time, he has largely remained out of Kindred society, and is said to have been (and may well still be) one of the Inconnu.

The tale of Dracula's Embrace and of his infamous breach of the Masquerade are quite unusual. While a number of sources suggest that Dracula has some great destiny and is (or will be) a major player in the Jyhad, little has actually been shown of his actions after his Embrace or of his interactions with the Kindred world, and his motivations in leading Bram Stoker to write Dracula remain murky. As a result, a number of theories have arisen surrounding Dracula's rise to power both in life and in death.

One such theory assumes that Lambach Ruthven is the direct childe of the Tzimisce Antediluvian, as suggested in one in-character and another out-of-character accounts presented by Clanbook: Tzimisce Revised;[2] also check Lambach's lineage and generation for more information on that topic. According to this theory, Lambach would be Tabak's sire (or grandsire), rather than vice versa; furthermore, Lambach would have manipulated not only the events surrounding Dracula's Embrace but also the events leading up to the death of Yorak beforehand. Many years before Dracula sought the Embrace, Lambach had petitioned to the Voivode among Voivodes (Yorak, at the time) for the right to embrace Shaagra. Yorak denied Lambach's request and granted the honor to Triglav the Three-Headed – however, the revised clanbook specifically stated that "Lambach would never forget that slight, and its repercussions would certainly echo down history's corridor".[3]

An extrapolation of these facts suggest that, as a fourth generation vampire, it might have been Lambach's interference that caused the Cathedral of Flesh to overcome Yorak's psychic rape and devour the Voivode of Voivodes. According to this version, the destruction of Yorak and the Embrace of Dracula (who was chosen to be Yorak's successor) would have been the vengeance of Lambach over his brother for the whole Shaagra affair; thus, Dracula would be a pawn of the childe of an Antediluvian, and possibly even of the Antediluvian itself – who was disappointed with some of its most powerful childer according to subtle hints given by the Revised Clanbook,[4] specially since both Yorak and Byelobog were destroyed under suspicious circumstances. Furthermore, in a private letter, Lambach voices discomfort about Țepeș, "or that ineffable Other of whom Țepeș is but the merest silhouette" – implying that "the Other" could be the Tzimisce Antediluvian itself.[5]

This theory is predicated on assuming that the accounts presented by the Revised Clanbook are correct, even though it contradicts out-of-character statements elsewhere that explicitly name Tabak as Lambach's sire and/or place Lambach in the 5th generation; furthermore, it assumes that Lambach's true personality is that of a skillful, subtle, and strong-willed manipulator, which would contradict every source that has ever described his character or temperament, as well as Lambach's assessment of himself to other Cainites. However, it should be noted that this out-of-character statements have been known to be dubious and unreliable sources of information (especially in the case of Children of the Inquisition).

In Beckett's Jyhad Diary, Dracula mentions that his sire is in Poenari Castle and apparently unable to leave.[6] However, Lambach was clearly seen in New York City and later on the Cayman Islands in the company of Prospero.[7] It is unknown if the source of this information was mistaken, or if that means that Dracula's sire was someone else entirely (possibly the elder lord Ruthven), or even that someone could be posing as Lambach and fooling the one he presumes to be his childer.[8]

For the real life historical figure see Vlad the Impaler.

Vlad Dracula, Son of the Dragon 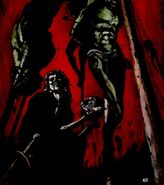 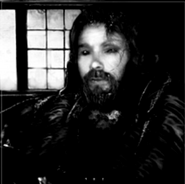 From Lore of the Clans. Art by Mark Kelly

Vlad and a new generations of Tzimisce