Dr. Douglas Netchurch is a vampire of the Malkavian clan, well-known worldwide as an expert on vampire physiology.

Born in America in the 19th century, he excelled in his medical studies and was considered a genius even before his Embrace. He went to Europe after the outbreak of World War I, assisting in the trenches, and it was there, in 1915, that his brilliant mind caught the attention of Trimeggian, who was involved in medical matters himself.

Operating out of a facility in Research Triangle, North Carolina, Dr. Netchurch has firmly established himself as the World of Darkness' foremost authority on the physiology and hematology of the Kindred. Among other achievements, he has added to his sire's catalogue of vampiric Disciplines, identified techniques to simulate the Insight possessed by the Thin Blooded, and greatly expanded Camarilla knowledge about both Thin Bloods and ghouls. He also popularised a standard for measuring the potency of an individuals vitae, the "Vitae Efficacy Unit" or VEU, though this scale was developed by a Tremere Professor.

Netchurch's insanity manifests as scientific detachment. He has an obsessive need to research, an inability to accept the supernatural – even in connection with vampirism – and is highly self-delusional, unable to see the brutality of his techniques and completely oblivious to his derangements. While the doctor's lab appears professional, and he seems to demonstrate a minimal amount of compassion, he is unaware of his tendency to Dominate people into signing his release forms before vivisecting them. 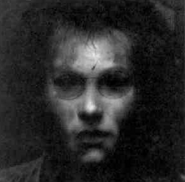 From Gehenna. Art by Michael Gaydos 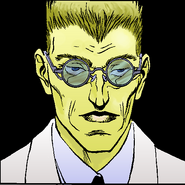 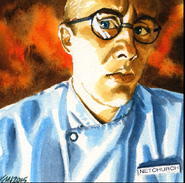 Retrieved from "https://whitewolf.fandom.com/wiki/Douglas_Netchurch?oldid=262829"
Community content is available under CC-BY-SA unless otherwise noted.