The excesses of Tammany Hall during the nineteenth century made many people very rich — especially Boss William Marcy Tweed’s Democratic Party cronies, who successfully bilked New York City out of as much as $200,000,000. While Tweed himself was eventually arrested, prosecuted and imprisoned (from which he fled to Cuba), one of his associates, Douglas Callihan, one-upped the old boss. Callihan used his money to buy his way into one of the other shadow societies of New York —the Kindred. Embraced by a Sabbat Ventrue, Callihan laid low and laundered his money through the Cainites of his new peerage.

Callihan quickly grew disillusioned with the Sabbat. Few of its members had the sort of refinement and decorum that he was used to. Those few who did snubbed him because of his lineage — had he known beforehand about clan sentiments, he would have tried to convince a Lasombra to Embrace him. As feelings between the sect and Callihan soured, he took up with a group of reformers calling themselves anarchs. With his money, his skill at manipulating people and events, and his notoriety in the mortal world, the anarchs welcomed him.

Callihan rose quickly through the anarchs’ ranks, becoming a boss in his own right. While the faction didn’t truly appeal to him any more than the Sabbat, he had managed to acquire some degree of power and influence within it. And it was just that possession of power that kept him where he was, a lion among the jackals, or so he saw it.

Over the years, he grew familiar with the Sabbat’s enemy, the Camarilla, and chose to keep himself and his anarchs out of the Battle of New York, hoping to steal a place for himself while the sects were distracted fighting each other. The Camarilla proved too swift, however, and the anarchs were caught off guard as the sect swept in and claimed all the old Sabbat domains for itself. Callihan was incensed, but the opportunity still existed. The Camarilla played on terms much more like his own than the turgid Sabbat, so he figured that he could adapt to their ways and finally take the socially prominent place that was his due.

Unfortunately for him, It was primarily young Kindred who had made their permanent havens in the city — the few “elders” who were around were no older than himself and seemed to largely want to place themselves behind the scenes for their own protection. Callihan chafed under these circumstances, especially when his anarchs were suddenly relegated to Staten Island domains.

Ventrue (antitribu by Embrace, though sectarian allegiance is with the anarchs, and therefore, arguably, the Camarilla) 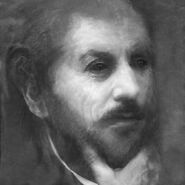 Callihan in New York by Night

Callihan in Coteries of New York

Callihan in Coteries of New York

Retrieved from "https://whitewolf.fandom.com/wiki/Douglas_Callihan?oldid=241714"
Community content is available under CC-BY-SA unless otherwise noted.