Djuhah was a warrior Assamite antitribu, the Fourth Seraph of the Black Hand, and a secret member of the True Black Hand.

He was born in 1025 CE to a Seljuk Turk family. He fought and was mortally wounded in the Seljuk Turk revolution of 1042 at the age of 17. It was during this battle that he was found by an Assamite, Kashan, who fed Djuhah vitae so his wounds could heal.

Djuhah served Kashan as a ghoul for 14 years. In 1056 Kashan embraced Djuhah. Djuhah honed his hunting and stalking skills and by the 1300s had dispatched several elders. By then he had decided to focus his next hunt on the most deadly of prey he could imagine, an Assamite elder. In this singular act of disloyalty Djuhah was soundly defeated. The elder, Izhim ur-Baal, saw too much potential in Djuhah and instead of destroying him, punished him and brought him to heel.

During the 1400s, with the formation of the Camarilla and the Tremere Curse, Djuhah and his new mentor both separately turned away from their clan and joined the Sabbat. During Djuhah's time in the Sabbat his joy of personal combat waned and he began to experience a new joy in controlling entire Sabbat packs and being strategically minded.

In 1952 Djuhah was appointed Fourth Seraph of the Black Hand after Wanyan, the previous holder, disappeared.

Until the Final Nights, Djuhah is a member of the True Black Hand. One night Djuhah went missing after his dealings with Tariq, the Silent. It is unclear where or not he was destroyed.

Djuhah, Seraph of the Black Hand

Ambidextrous / Flesh of the Corpse 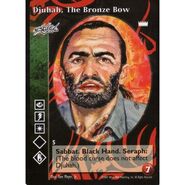 Retrieved from "https://whitewolf.fandom.com/wiki/Djuhah?oldid=211686"
Community content is available under CC-BY-SA unless otherwise noted.