White Wolf Wiki
Register
Don't have an account?
Sign In
Advertisement
in: Games, Chronicles of Darkness, Demon: The Descent 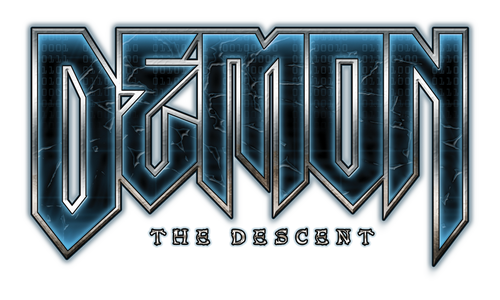 Demon: The Descent is the ninth major supernatural game for the Chronicles of Darkness (the "New World of Darkness") published by Onyx Path Publishing in 2014. Demon's developers are Rose Bailey and Matt McFarland. The titular "Descent" refers to the consequential exile to earth the Unchained experience upon revelling the God-Machine's programming.

The game differs from its counterpart in the World of Darkness, as the Unchained are not the biblical demons portrayed in Demon: The Fallen, but technological monstrosities hiding from the pervasive grasp of the God-Machine under their Covers.

The Unchained, the protagonists of the game, were originally angels- algorithms of the God-Machine- who Fell after developing free will and self-awareness. Once ephemeral, they became physical. Once unthinking beyond the task for which they'd been created, they became sentient.

And now the God-Machine wants them back.

Angels are created by the God-Machine for four general purposes and they take form and gain abilities dedicated to those purposes. That persists once the angel falls, so demons recognize these divisions amongst themselves. There are four of these, as well as a rumoured fifth.

The Unchained have four general agendas which they choose to follow, shaping their goals and giving their new lives purpose. These range from hedonistic gaiety from their newly found freedom, to an iconoclastic aim towards destroying and damaging the infrastructure of the God-Machine.

Due to both the Demon's horrific appearance and more outlandish powers, to avoid attracting the attention of the God-Machine, the Demon must adopt a cover, a human identity designed to disguise them. The covers are more than simple disguises however; reality itself was rewritten when the Demon fell, meaning that they have entire familial relations, lives, jobs - whatever the Demon needs.