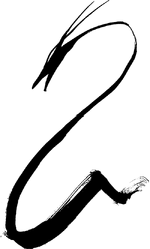 The Dance of the Thrashing Dragon is the Kuei-jin Dharma of Yang.

The breathing cage set one bird free
It nestled in the bars and shat in the straw
The bird's wings were mountains
And forests covered them.

The Dance of the Thrashing Dragon

Like trees, the Laughing Rainbows of the Thrashing Dragons Dharma rise out of the fertile ground and unite it with the raging sky. These Kuei-jin are as alive as the undead can be. Bursting with life-energy, the followers of the Green Way resemble the forces of nature – too powerful to be silenced, too vivid to be real. As far as they're concerned, creation is a rainbow – illusory, but too colourful to ignore. In its colours, they see the unity and symmetry of Heaven. The idea, as the Dragons see it, is to experience each of those colours as vividly as possible. As a result, Laughing Rainbows are in general messy and vulgar, indulging themselves with wild feasts and drunken orgies - celebrations that usually feature living "entertainment," too. The lands of the Golden Courts hide Rainbow temples so infamous that even vampires avoid them. In their calmer moments, a Thrashing Dragon can be gentle and compassionate. Like wood, they grow tall and strong, yet bends before snapping. They nurture life, yet feed on it without remorse.

Shunning society's restrictions, they explore life's lush infinities through martial arts and Tantric practices. Since life assumes ten thousand forms, most Thrashing Dragons master shapeshifting arts. The Thrashing Dragon way is highly animistic. Looking deep into nature, each Rainbow sees the spirits beneath life's skin, and they honor them with thanks, gifts and rites. Truly skilled Dragons can move beyond the Wall and speak to the spirits in their own tongue; a younger one simply recognises the kami and grants them respect. Thrashing Dragons are also known for their willingness to involve others in their lives. Life is not a solitary game - it requires lovers and rivals and romance and danger, if it is to keep the Thrashing Dragon on edge and awake. Such an exciting life requires a strong cast of supporting characters, and Thrashing Dragons as a group are perfectly willing to entangle others in their affairs. Among Kuei-jin and other shen, they typically observe decorum, since giving offence might lead to a duel or hard feelings.

The Thrashing Dragon Dharma is divided into several sects that originated with the teachings of a prominent bodhisattva. Most of these bodhisattvas are still active and advise comitted Dragons in the ways of their Dharma. It is, however, not unusual for younger Keui-jin to spend a long time without any sect affiliation, instead trying to find their own path.

The Dance of the Thrashing Dragon Training

Before their deaths, many Thrashing Dragons denied the flesh. All their repressions blow sky-high when the karmic debt comes due. Some ferociously carnal people do return to finish what they started in life, but most Laughing Rainbows learned to laugh only after they died. By coupling with a living partner, the vampire shifts her energy to his own, then refines it into potent Chi — the life force many once denied.

The Dance of the Thrashing Dragon Weakness

Confrontation is enlightenment to these vampires, and they go out of their way to enlighten everyone in the vicinity. As could be expected, Thrashing Dragons are shameless, impulsive, lusty and violent. Most go naked, or nearly so, and delight in smashing social customs. Their voraciousness doesn't end with sex; the hunger takes a literal turn in the Thrashing Dragon philosophy. Greedy for Yang, these creatures often eat their prey raw (and usually alive).

Beneath the revelry, however, many Dragons hate themselves. In a way, their hunger is a denial of what they have become. By consuming life-force, they secretly hope to undo their curse; it doesn't work, but they keep trying.

Auspicious omens and symbols for the Dance of the Thrashing Dragon

This lists the most important symbols and omens of the Dharma that are sometimes integrated into their homes and temples. Bodhisattvas frequently manifest such signs whenever they appear. The symbols are: Rainbows, thunderstorms, blooming flowers, blood, yoni, and lingam symbols

Affiliations of the Dance of the Thrashing Dragon

Wood, the number 3, the color green, and the east direction.

From Dharma Book: Thrashing Dragons
Add a photo to this gallery

Retrieved from "https://whitewolf.fandom.com/wiki/Dance_of_the_Thrashing_Dragon?oldid=216445"
Community content is available under CC-BY-SA unless otherwise noted.