Beckett is a famous Noddist, said to be a member of the Mnemosyne, the Memory-Seekers, a bloodline of Caine-worshippers devoted to the study of the first vampire and the Book of Nod. He is one of the most prominent characters throughout the books of Vampire: the Masquerade.

Wandering the globe for at least 300 years,[3] exploring Kindred lore and mythology, the British vampire Beckett may be the one of the greatest Noddist historians and archaeologists of the World of Darkness.

What little can be pieced together about his mortal past is that he was born in England and Embraced in Oxford. He still maintains strong ties to his British homeland, having a Haven beneath the Calleva Arms in Silchester. He quickly became disillusioned with vampire society and chose the way of the Autarkis. Alone, he met Aristotle de Laurent, who introduced him to his studies and became his adopted sire.

Though he does not follow the Sabbat's Path of Caine (he may actually follow the Path of Humanity), as most Noddists do, his driving goal is to determine the true history of the Kindred race, and especially the early history of Caine and the Antediluvians in Enoch. Forces ranging from the impersonal and destructive hand of entropy to the very personal vampires of the Sabbat and Camarilla conspire to keep him from learning the truth, as he sees it. Therefore, he attempts to avoid vampiric conflict when possible, preferring only to face the sorts of problems that mortal archaeologists must confront. He has had moderate success with this, for surely not every vampire of the Sabbat and Camarilla is arrayed against him.

Beckett is a rare Gangrel: well connected and educated, he has cultivated contacts and allies around the world from the ranks of mortal and supernatural alike, though few know him well. His closest allies are his erstwhile companions Lucita and the raving prophet Anatole. His long time adversary and competitor is the Tzimisce scholar Sascha Vykos.

Known over the world for coming and going as he pleases and always appearing when "interesting" items, books, scraps or stories appear, Beckett is also notorious among Kindred scholars for his theory that the story of Cain and Abel is actually a myth, representing human civilization's move from hunter-gatherer to an agrarian society. How this is connected with vampirism he is not sure, but if anyone can find the evidence and discover the truth, Beckett can.

His knowledge of ancient lore, linguistics, and fighting skills are perfectly complemented by his mastery of a number of Disciplines outside the usual purview of the Gangrel, and a more than passing knowledge of Thaumaturgy. His skill with the Gangrel trademark disciplines is such that he often travels as a wolf, and he was known to run the length of a football field under the scorching sun. He has two Beast Marks: cat-like red eyes with crescent shaped pupils which glow faintly, and hands and forearms covered in coarse hairs and claw-like (even by Kindred standards) nails, forcing him to keep them covered and wear shaded glasses among mortals.

Beckett is incredibly snarky and proud. He constantly uses his superior intellect to put others (Kindred and Kine alike) in their place in the most sarcastic ways possible, which has gotten him into trouble on more than one occasion. He does, however, abide by the rules of whichever political sect is controlling the city he is visiting. Beckett tries his best to be respectful of the different traditions, but has a disdain for the formalities and pomp of court. He finds the obsession with separation by clan to be pointless and has little-to-no loyalty to the Gangrel as a whole.

While he has little tolerance for mortals in general, Beckett does try his best to avoid killing them while feeding. This is difficult in his wolf form, as his animalistic instincts tend to take over. If he is unable to stop himself, he tries his best to make sure his victims die as quick and painless a death as possible.

He pities the Kine that are made into ghouls but is not above giving them his blood (while they are going through withdrawals) in exchange for information. Due to his globetrotting, he purchased a private jet in order to avoid the sun while traveling. This forced him to (reluctantly) create his ghoul, Cesare; an alcoholic, out-of-work pilot.

Beckett made an appearance in the Court of François Villon, Prince of Paris, in 1789, alongside Lucita and Anatole. It was there that he first voiced doubts on his adoptive sire's compilation of fragments of the Book of Nod, due to his growing conviction that the Book itself may be an allegorical tale. He credited the mortal philosophers with whom he had spoken to in the salons with giving him new inspiration and perspective in this regard, teaching him the value of skepticism.

In 1888, he was wanted for dead in London after killing two Kindred in a fight for a rare text. While trying to escape, the Setite Halim Bey noticed a drawing he had done of a tapestry in Egypt. It was a representation of Kemintiri, the thousand-faced daughter of Set. Beckett spent the rest of the year unknowingly under the influence of the Followers of Set (and their clan discipline, Serpentis), aiding them in finding and helping Kemintiri. During this time, he rescued and fell in love with Lady Emma Blake, a Tremere neonate (and former ghoul of Kemintiri) who was being used as a spiritual vessel by the Followers of Set (though whether he actually loved her, or his feelings were a result of the Setites' manipulation is up for debate).

In the 1890s, Beckett found his way to Vienna, where the ideas of Dr. Sigmund Freud concerning the human psyche fascinated him. Perhaps out of a desire to correlate Freud's research with the vampiric condition – particularly with regard to the relationship between sire and childe – Beckett studied the techniques of psychoanalysis from the master himself, until he left again.

During World War I, Beckett was wounded while exploring one of the trenches and was saved by a vampire named Ameirin.

In 1945, he Embraced a German vampire hunter named Marie because he wanted to punish her for burning a list of occult tomes that he wanted to obtain. She continues hunting him into modern-day Berlin and has sought revenge on him ever since.

During excavations near the ancient Cappadocian city of Kaymakli in 1999, Beckett's companion Okulos got lost within the wards placed by the Antediluvian founder of the Cappadocians himself. Beckett, however, was able to recover a fragment of the Book of Nod that told of the End Times. He relegated it to the D'habi Revenant Rhania in order to translate it. His adoptive sire, Aristotle de Laurent, arranged for the transport of the disk and the revenant to Montréal, to a coven of learned Noddists to deflect Beckett's inquiries and to decipher the fragment himself. This began a feud between him and his adoptive sire.

In 2001, Beckett discovered the methuselahs Menele and Helena. He was also pulled into a battle involving the Mummy Nicholas Sforza-Ahnkhotep.

In 2004, following up on rumours of "Caine's coffin,"[4] Beckett traveled to Los Angeles to study the Ankaran Sarcophagus. He worked with the Prince of Los Angeles, Sebastian LaCroix, to help the latter open the sarcophagus. Before its key was retrieved, succumbing to the increasing sense of unease which blanketed the city, Beckett ultimately fled.

In 2005, while trying to free his friend, the Nosferatu Okulos, Beckett broke through a ward on the ancient Cappadocian city of Kaymakli. By doing this, he not only freed Okulos, but also the Lasombra Antediluvian, bringing about one of the semi-canon versions of Gehenna. 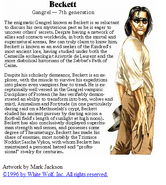 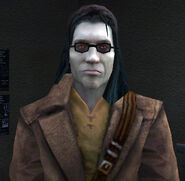 From Vampire: The Masquerade - Bloodlines 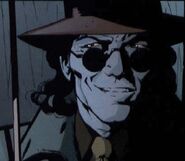 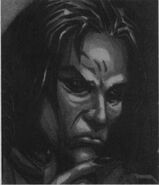 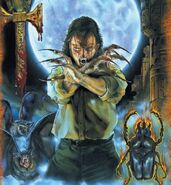 From Lay Down With Lions. Art by Tom Fleming

Anatole and Beckett from The Madness of Priests. Art by Christopher Shy

From Lore of the Clans. Art by Andrew Trabbold

Beckett is reading something interesting