Turtle
The Croatan were one of the three tribes of Garou native to the Americas up until the arrival of the Europeans.

They valiantly sacrificed their entire tribe in order to banish a powerful spirit of the Wyrm from the physical realm and avoid the Apocalypse.

When the continents split apart and the Garou divided themselves into tribes, three made the long walk across the ice to the Americas. These three, the self-described "Pure Lands Garou" were the Uktena, the Wendigo, and the Croatan. While the Wendigo favored the northern portions of America and the Uktena ranged far to the south, the Croatan favored the lands around the Mississippi and much of the North American East Coast.

The Croatans were very lenient with their Kinfolk tribes, only intervening when they directly harmed Gaia or threatened to aid the Wyrm. For this reason, the Tribe tolerated the first inventions brought by the Weaver's gift, since they did no true harm and greatly enhanced the life of their Kin. The people of Cahokia and the Croatan coexisted for a long period of time, exchanging knowledge of the spirit world with each other. Making a pact with the spirits of crops, the Croatans promoted agriculture within their protectorates, which caused arguments with some of the more martial Wendigo. As some of the people became corrupted by the Wyrm and demanded blood sacrifice, the Croatans sought to find out how this practice could have spread so far. A cunning Theurge, Three Scars, was sent to investigate and found evidence of corruption from the Defiler Wyrm, as well as the first evidence of the existence of the Triatic Wyrm within the Pure Lands. The ensuing battles against the humans that had adopted the ways of the Weaver and made spirit alliances of their own shook the Pure Lands and ended when the Croatans called out to Turtle, who sent an earthquake that destroyed the cities of the humans.

The tribe died to the last in an epic battle in 1589, attempting to defeat the Eater-of-Souls after it managed to manifest in the physical world. As one of the great triatic Wyrms, if the Eater-of-Souls had remained in the real world, it could have started the Apocalypse. Only by sacrificing the entire tribe in a great ritual were they able to drive it back to the Deep Umbra and Malfeas. The sacrifice of the Croatan was so thorough that no new cubs were born to their kinfolk, and their tribal totem, Turtle, was plunged into deep Slumber and has not awoken for centuries. They were totally annihilated both physically and spiritually.

The death of Middle Brother also caused a rift between the Uktena and Wendigo. The Uktena prevented many Wendigo from sacrificing themselves with the Croatan. The Uktena felt they would need the Wendigo to fight new threats. The Wendigo felt they should have provided more aid to the Croatan and resent the Uktena's interference. Both Uktena and Wendigo harbor deep bitterness towards the European Garou, who they frequently call the Wyrmcomers, whom they accuse of bringing the Eater-of-Souls to the Americas, causing the terrible events that transpired in the 16th century.

Though the Croatan are said to have fully and completely disappeared by numerous sources, others cite their influence into the present day. Rumors exist of the last Croatan still alive somewhere within the Midnight Circus, preserved beyond time, and the disappearance of Roanoke is somehow tied to their sacrifice.

Croatan were strong believers in the sept and the caern. They took the concept of sacred lands more seriously than most Garou. They were also a fairly practical tribe, not much given to poetry or fancy.

The three tribes of North America referred to themselves as the Three Brothers. Uktena was the eldest brother, Croatan the middle, and Wendigo the youngest. They were named that way not out of any sort of age-based seniority, but out of their role among the three Pure Lands tribes. The Wendigo were always angry and rash, full of the fires of youth. The cunning Uktena sought wisdom, sometimes at the expense of the here and now. The Croatan took the balanced path between the two.

The Croatan were the most social of the Three Brothers, and many expressed this tendency with their Attributes and Abilities. They were a stolid, enduring tribe, and favored traits that enhanced their resilience in one way or another, and were also practiced survivalists.

The Croatans were widely trusted even among the other Changing Breeds. One old Caern of the Tribe was also a holy site for the Camazotz, who used the cavern for their breeding ritual. When Bat fell to the Wyrm after the last Camazotz in the Americas died, the Caern collapsed and has not been reopened since.

They were passionate but not mercurial, thoughtful but not navel-gazing. Another aspect of the Croatan’s tribal mentality came from their elemental connection. The Croatan drew strength from the earth itself, channeled through their totem Turtle. They were solid and steadfast, not as slippery as the water-influenced Uktena and their river serpent totem, or as cold and furious as the Wendigo and their bitter wind-spirit allies. This influence had its drawbacks, of course. The Croatan were a stubborn tribe, often to the point of inflexibility.

While the Wendigo were the greatest Warriors and the Uktena had a powerful gift for binding Wyrm beasts, the Croatans' talents lay in purification. Even in the Modern Nights, old Croatan Caerns are extremly resilient to Wyrm taint. The Croatans also trafficked extensively with Helios and his brood, which sometimes brought them the anger of the other Pure Tribes.

The Croatan are a reference to the Croatan tribe, a group of Native Americans that lived on an island located in the Outer Banks of North Carolina. This was the island to which the legendary Lost Colony, the earliest British settlement in North America, supposedly fled to. When John White, founder of the colony, arrived on Roanoke Island after an expedition to get the colony provisions, he discovered the word "Croatoan" carved into a post in the abandoned settlement. He set out for the island, but a hurricane blew up, and so he was unable to travel to Croatoan. The fate of the settlement remains unknown to this day, although long standing stories about Native Americans with pale skin and gray eyes linger along the coast. 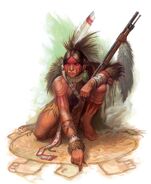 Croatan from W20
Add a photo to this gallery

Retrieved from "https://whitewolf.fandom.com/wiki/Croatan?oldid=238736"
Community content is available under CC-BY-SA unless otherwise noted.