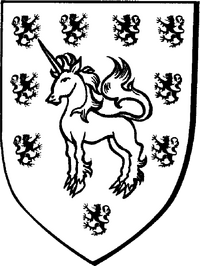 The Council of Nine, or simply the Council, is the leadership of the Council of Nine Mystic Traditions. The Council meets in special Chambers in Horizon Chantry, located in the city of Concordia in Horizon. They gather at a round table with ten seats; nine seats are emblazoned with the symbols of one of the nine Spheres, while the tenth was historically set aside for guests.

The Council officially met once every nine years, although no all councillors attended each meeting. According to some, the 1967 meeting was the last "big" one, although this conflicts with information found in Mage: The Ascension Second Edition. Knowing the information presented therein, it's possible to extrapolate all past meeting dates.[1]

The Council officially met in the following years:

Unfortunately, the 59th Council was to be its last, as the Horizon War and Avatar Storm followed shortly thereafter, not to mention the ravages of Armageddon. Had it survived, the Council's next three meetings were to have been in 2006, 2015, and 2024. It is unknown if the New Horizon Council followed the same schedule.