Constancia, the Priestess of Bones, was one of the high-ranking members of the now extinct Cappadocian, and the signature character of her clan in Dark Ages: Vampire.

As a mortal, Constancia was born in Greece. After her Embrace, she quickly became the Priestess of Bones and the Matron of the Erciyes Temple, the Cappadocian clan spiritual center and home to the Antediluvian Cappadocius himself.

As a protector of the doomed secret of the Cappadocians, she sees threats in every shadow and assassins in each alcove. Her enmity with the Tzimisce Myca Vykos and the upstart Lasombra Lucita are the talk of the Erciyes monks, and news of their exploits commonly brings Constancia into fits of rage and paranoid seclusion. She does, however, hold a special place in her unbeating heart for the Malkavian Anatole, whose divine madness often inspires her and gives her new insight.

Though not an adventurer like many Cainites in the Dark Ages, she has nevertheless traveled all across Europe and even into the dark continent of Africa and the foreign lands of Asia. Constancia has taken it upon herself to make and cultivate contacts in every land she has visited, and rare is the night when at least one letter from a far-flung friend does not show up in the hands of a messenger.

When news came that a wealthy man of the Venetian Giovanni family had made new breakthroughs in the dark art of Necromancy, Constancia was excited and quickly told her sire while he lay in torpor. Cappadocius was also excited about the news and reached out through his dreams to Augustus Giovanni and invited him to Erciyes to be Embraced.

Japheth, Constancia's sire, objected to letting outsiders with untrustworthy reputations into their clan, but Cappadocius disagreed and Augustus was brought to their temple. Upon his arrival to the temple, Japheth and Constancia saw the rot that festered within Augustus's soul, for he sought only power, his motives and means corrupt as any mortal despot. Though his necromantic breakthroughs were impressive, he did not seek enlightenment, knowledge, or the answer to the eternal question. He merely wished to crush his opponents.

Servants drained Augustus of all his blood and Japheth entered the chamber with a vessel of Cappadocious' blood. As Augustus drank, Constancia turned away, unable to watch. Nonetheless, a little bit of the blood was stored in the True Vessel.

In the end, the warnings were correct and Augustus betrayed the clan and diablerized its founder. Lady Constancia went into seclusion in 1443, one year before the Giovanni purge.

Constancia is an ardent researcher and follower of the Road of Bones, and has recently taken her studies of death in frightening new directions. If what she says is to be believed, she has discovered a ritual that allows her to utterly destroy the soul of a still-living mortal, leaving the body a mindless husk. Whether or not this works on vampires is unknown (as the condition of Cainite souls is a matter of much debate), but her enemies have universally expressed concern over the wanton abandon with which she exercises her experiments over Cainites and kine alike.

Her visions showed her that the striving for Apotheosis would destroy the Cappadocians. She, however, suspected Lazarus to be the culprit of this folly, who would use the secrets of the Sargon Codex to achieve his goal. In the same breath, she sought to destroy the Dream of Constantinople, seeing Mi-ka-il's reverence as an embodiment of the archangel as a similar blasphemy.

Constancia vanishes from sight in 1443, exactly one year before the Giovanni purge of Clan Cappadocian gets underway. An unmarked tomb was found in 1936 near Giza, containing a desiccated corpse, and many Giovanni and other vampires believe to be Constancia's, but no incontrovertible proof has been forthcoming as the body disappeared before the Giovanni could investigate. Conveniently, one of the Mortis powers is to reduce oneself into the form of a desiccated corpse.

Unknown to most, Constancia relocated to London and then to Egypt, determined to learn whether Lazarus and Japheth had been the same person (as Lord Camden, the Cappadocian seneschal of Mithras, had believed). Anatole met Constancia in a ramshackle hut in the Egyptian desert (which she had named "Hell") around 1882, surrounded by loyal ghouls. Having been called there after the Sargon Fragment had been stolen from Lazarus' tomb, Anatole and a coterie of Kindred were tasked to pursue the thief, the Tzimisce known as Sascha Vykos. Retrieving the tablets that held the content of the Fragment, she advised him to bring them to the Children of Isaac.

Some believe that she is now known under the name Unre, one of the Harbingers of Skulls. However, as Constancia was never sealed in Kaymakli and had been active centuries before in the Skinlands, unlike Unre, the situation is ambiguous.

Cults of the Blood Gods describes ritual, that resurrected Constancia in a new body - that of Günter Hildebrant. The Constancia Risen is a soul gone mad stuffed into a mortal body. It holds the shattered memories of its former life, and those of Oblivion, forming an amalgamation of rage, loss, and cunning. The Risen is a powerful foe with full mastery over the Oblivion Discipline and with no regard for collateral damage. It defends itself for survival. Its traits are skewed away from those Constancia might have possessed when fully capable.

Constancia was tall and thin to the point of emaciation. Her hair was light brown and extended most of the way down her neck. Her features would be beautiful if they were not set so harshly, and were not so sunken. When she leaves her haven, she wears a long robe that covers her hair and face.

During necromantic rituals, she has marked skin with ceremonial designs of henna, ink, and blood.

Despite the fact that Constancia was born in Anatolia, her name derives from Latin. It could mean that she was embraced during the time of the Roman Empire. 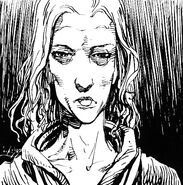 Constancia, the Priestess of Bones. Art by Jason Felix