Print: $16.94
PDF: $7.50
Clanbook: Malkavian Revised is a sourcebook for Vampire: The Masquerade Revised Edition, detailing the secrets of the Malkavian clan.

The Circle of Chaos
The childer of Malkav bear two curses: undeath and madness. From emotionless sociopaths to raving lunatics and everything in between, the Malkavians nonetheless command startling insight. Does what they know drive them to madness or does their insanity allow them to peer into a world the rest of us fear to see?

The Method of Madness
As part of the revised lineup of clanbooks, Malkavian takes one of the classic sourcebooks for the game and brings it into a modern context. All-new information accompanies a re-examination of earlier concepts, allowing you to add as much depth to your character as you like. The sheer volume of information contained in the new clanbooks (each 32 pages longer than the first-edition series) permits Storytellers to round out their Chronicles.

Chapter One: The Tower of Babel

A history of the clan, as told to a young Malkavian named Daniel by a voice inside his head. The voice is presumably an elder vampire speaking through the Madness Network, or perhaps the Network itself.

The first half is a summary of the Malkavian take on the Modern Nights, as told by a "20 years dead" Malkavian talking to himself. (He is never named, but knows many famous Malkavians, including Dr. Netchurch.) Details how the clan chooses for the Embrace, the nature of clan gatherings, clan practices and traditions, and attitudes toward the sects, other clans and other supernatural beings, though these last opinions seemingly come to the narrator from the Madness Network. He also mentioned other 'members of the family' - his  familiar malkavians: Becker, Drew, Ringall, Fitzgerald, Pearl, LeRoi, Marleybone, Reeve, Pack, Rosegarden.

The second half of the chapter is roleplaying advice and new rules: derangements, Merits and Flaws, Discipline powers, and game mechanics for the Madness Network.

Sample characters and significant players from the Malkavian clan, including a coterie who live in a shared haven called The Hyde.

The Revised clanbook is generally seen as an improvement over the original, which while fondly remembered was also criticized for its overt silliness. The new book gives a much more realistic portrayal of mental illness. 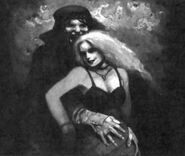