Print: $14.99
PDF: $7.99
Clanbook: Lasombra Revised is a sourcebook for Vampire: The Masquerade Revised Edition. The book focuses on clan Lasombra and delves into the clan's relationship with the Sabbat, the supernatural darkness which it commands, and Lasombra's roots in the Mediterranean and connection with the sea.

Born of Darkness
The Final Nights have twisted the nobility of the Keepers' clan, turning them into the aristocrats of the Sabbat. Their legacy of shadows eclipses the light thrown by their packs' ritual fires. But are the Lasombra truly the esteemed leaders of the Sword of Caine—or do they simply abuse it to serve their own ends?

Introduction: The Darkness Claims You

Fiction. Andrew Emory sets down the story of his "test" and Embrace ten years ago for the mortal he has selected to become his childe tonight.

Chapter One: An Unmirrored Corridor

Lessons given by various Lasombra, prepared by Andrew (now a Bishop) for his neonate pack, covering the history of the clan and the Sabbat. The third lesson covers the Great Revolt, and specifically the murder and diablerie of [Lasombra], and brings to light considerable discrepancies in the Sabbat accounts. The chapter ends with a suicide note written by Ming, a member of Andrew's pack who becomes antitribu, who killed herself by waiting for the sun in Seattle on June 12, 2000.

Andrew's lessons continue, detailing the traditions of the modern Clan Lasombra, including a great amount of detail on how to select a mortal for the Embrace and the systematic destruction of that mortal's life that is the traditional test of worthiness. The chapter also covers the various factions and philosophies that exist within the clan, how the clan interacts with both Sabbat and Camarilla (the latter including a section on the antitribu),and new mechanics for Lasombra characters, including Abilities, Merits and Flaws, variations on the Path of Night, and a detailed treatment of Obtenebration, with a separate treatise on the Abyss.

"Yes, I'm sure the pain where your family, your job, your standing in the community once were is sharp."
— Andrew Emory in his letter to his prospective childe 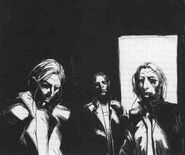