Print: $11.99
PDF: $6.99
Clanbook: Cappadocian is a sourcebook for Vampire: The Dark Ages centering around the elusive (and eventually extinct) Clan of Death.

More than a clan of scholars and priests, Clan Cappadocian is the Clan of Death. From their humble beginnings in the Holy Lands, these doomed vampires have spread throughout the Dark Medieval world, pursuing their eternal quest as history and time conspire against them. They are condemned by their own actions, and toil endlessly against inevitable destruction.

Chapter One: The Revelation to the Childe

A newly Embraced Cappadocian childe goes through his terrifying initiation.

Chapter Two: Death Among the Dead

The history of the Cappadocians, beginning with the Embrace of their founder, going through important events like the Feast of Folly, and information on their current activities.

The way Cappadocians wile away their existence, the factions they have formed, opinions on the other Clans and supernaturals, and goodies such as new abilities, Merits and Flaws, high level Mortis abilities, and the Medieval-era Necromancy Discipline.

Character templates for your deathly pleasure.

Those who manipulate the clan.

Information on the rise of the Giovanni in the Medieval era following the diablerie of Cappadocius, as well as notes on the origins of the Samedi. 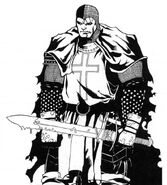