Celestyn was one of the earliest Tremere Embraced into the Clan. A studious individual without an aversion to field work, his research greatly aided the Clan in its early nights and later focused on how to avert Gehenna.

Celestyn was born as Calnor in a village near London as the son of the seneschal of an eccentric noble. He obtained an aristocratic education and soon learned of magi who dwelled nearby. When he stood in front of their chantry and asked to be educated in the magical arts, the mages were impressed and admitted him. His mentor, the magus Persigno, gave him the name Celestyn as a reflection of his interest into celestial bodies. He spent a part of his apprenticeship in Prague. In 995, he was advanced enough to lead his own expeditions for ancient relics and forgotten magic. In 999, Celestyn was called to Ceoris for his excellent skills at keeping a library. His job was to order the research into the project to preserve the immortality of House Tremere.

While he took his new duty serious, Celestyn also traveled Transylvania and the region surrounding Ceoris in his spare time. Cataloguing the strange night-folk surrounding the area, he was vital for the early Tremere's understanding of the Tzimisce. For this, Etrius decided to grant him the Embrace. True to his name, he soon undertook the project of studying how astrology interacted with the curse of Caine. He hoped that their new connection to the night would also allow for a greater understanding of the stars and use that knowledge to determine why some vampires were able to rise earlier than others. He continued his forays into Tzimisce country, often posing as one of them, joining their strange rites and reporting back to his sire at Ceoris.

Around 1313, Celestyn left Ceoris for an unknown quest concerning Gehenna. He remained gone for several centuries, in which many rumors about his whereabouts circulated. Some placed him in the New World, others among the Inconnu, while others believed that he met Final Death at the hands of the Tzimisce. In truth, Celestyn had traveled to the Middle Kingdom to study its strange inhabitants as well as their magic. He managed to gain a limited form of acceptance from the native Wan Kuei and was even tutored by one of them in the arts of Feng Shui.

In 1998, Celestyn returned to Vienna. Sharing much of what he had learned with his sire, he later traveled among various European chantries. During this travels, he discovered the geomantic web that spanned Romania and bound the demon Kupala. Fearing what would happen if the demon would be released, he contacted a group of elders that were present when the web was first constructed to repair the damage that was already done to it. Hoping to use Dracula's sword to slay the demon, he gifted it to a coterie before departing.

Celestyn is said to have continued his quest for knowledge to the eve of Gehenna.

Celestyn presents the same hearty, fit appearance he displayed when Embraced. His hair is dark and blond, his eyes brown. His features are friendly if not devastatingly handsome. In Ceoris, he wears scholarly robes; these are well cared for and even a little ostentatious. Outside, he adopts simple, rugged clothing that allows him to clamber through ruins or make hasty escapes.

Even in his exile, Celestyn is said to have retained correspondence with his old friend Aristotle de Laurent and later his adopted childe Beckett, with whom he shares an enmity to the Fiend Sascha Vykos. 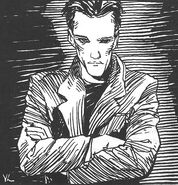