The Ceilican are a hidden tribe of Bastet.

They originated in northern Europe, and have strong ties to the fae but are not fae themselves. When in feline form, they resemble oversized domestic cats.

Also called Ring Dancers, a fact that is driven through a Tekhmet's head during their fostering. There is no telling how many of the old secrets still work, and they're still in circulation. Of all the tribes, the Ceilican have adapted best to the modern world. Most of them favor sports, music, mass media and, frighteningly enough, psychology.

Passion intoxicates these Folk; anything that stirs up emotions draws them like ants to sugar, and they're not shy about whipping up a few frenzies now and then just to keep things interesting. Most Ceilican have a natural aptitude for technology, too; no other tribe is as comfortable with computers and mechanical devices as the Ring Dancers. Like all Bastet, they share a Yava that was once exploited by the lords of Faerie to enslave them.

The Ceilican can trace their ancestry back to the maneless lions of northern Europe and are regarded as cousins to the Simba (although every Simba would be outraged to be compared with one of the Ring Dancers). During the terrors of the War of Rage that destroyed their kin, the surviving Ceilican pledged themselves to a lord of Faerie, who soon enslaved them and infected them with their mercurial mannerism and even their weakness against cold iron. Legends claim that this tribe died out in the great witch-purges of the 1500-1600c. As usual, legends lie; they didn't die, they simply went underground after escaping Arcadia. A mercurial breed, these cats danced with the Good Folk and demons alike, and led humans along for the festivities. Their wild ways caught up with them; faerie lords enslaved them and witch-hunters burned them. By the time the tribe's survivors sailed to the Americas, they were but a handful. Common wisdom calls them dead, and the Ceilican won't dispute the claim.

During their annual moot in the highlands of Scotland, the Ceilican came under attack by Black Spiral Dancers. Many died on this day, some survived and others were dragged down to Malfeas and transformed into the hideous Hellcats. The tribe is now considered defunct by many Bastet.

All varieties of Ceilican favor blades over guns; blades just simply have more style. Most Ceilican dabble in magic as well. There's a definite cunning bent to this tribe, a mischievous spark that ignites either playful games or malicious villainy (and frequently both). The Ceilican curse manifests in a divided nature. While most Bastet affect a Pryio, or moon-favor, which indicates their overall personality, the Ceilican shift Pryrio unpredictably. A friendly dancing cat may become sullen and conspiratorial without warning, which makes friendships with them difficult. Even most freewheeling Ceilican have a manic, unstable air; add this to their extreme deep-cover antics and you get an enigmatic and volatile tribe.

Of all Bastet, the Ceilican most closely resemble domestic house cats; they are, however, much bigger - the size of small panthers - and can be quite fierce. Many have patterned fur - stripes and patches are common - although most favor a predominant color like black or white. Rebels at heart, lots of fae cats enjoy punk and pseudo-medieval fashions. Such clothes allow them to be their flamboyant selves and get away with it. 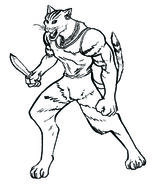 Retrieved from "https://whitewolf.fandom.com/wiki/Ceilican?oldid=239008"
Community content is available under CC-BY-SA unless otherwise noted.