Cedrick was born in 1902 into the prestigious Calhoun family, an influential dynasty in Illinois state politics. However, he was born with a number of serious physical disabilities, including a cleft palate, and a withered arm. When he was 13, his uncle sent him to a boarding school in Colorado, to keep him from becoming an object of public scrutiny for the family. Cedrick was no happier there. It took him several years to plan an escape, and was ultimately met with little resistance once he made his move.

Cedrick, sensing he was being followed, laid a snare trap to capture whoever (or whatever) was stalking him. That night, the trap was sprung, but nothing appeared to be caught. A Nosferatu named Tommy appeared, devouring what turned out to be a Malkavian that he had been tracking, and introduced himself to Cedrick. The Nosferatu made Cedrick his ghoul until he became an adult, when he Embraced him. The two engaged in a spate of wanton diablerie across the Rockies, until they encountered Gangrel Archon Nathaniel Simmons, who killed Tommy and very nearly also Cedrick.

Fleeing back to Illinois, Cedrick's envy was stoked by the discovery that his younger brother had entered politics, a path denied to him for want of regular appearance and able-bodiedness. He robbed him of his financial holdings and drained him dry, but the satisfaction of vengeance was short-lived, as he discovered his brother was actually a decent man who cared for two children by himself, deeply missed Cedrick, and had aspired to honest political goals.

Beset by agonizing remorse and shame, Cedrick gave into the Beast for a time, fleeing to a deserted mine where he spent months feeding off of bats and lizards. Eventually, he summoned the willpower to make an about face in his ways, providing for his niece and nephew with a trust fund until they were grown, and taking after his brother's example by becoming a crusader for the vulnerable and downtrodden. He finally returned to Kindred society when he came to the conclusion that the greatest injustices he encountered were those committed by his own kind.

After the fall of Lodin in 1993, Cedrick's dark horse campaign for Prince of Chicago provided him with a platform to gain respect in the Kindred community, though many others were inclined to distrust him for his geniality and conspicuous helpfulness.

When Nosferatu primogen Khalid al-Rashid vanished, Cedrick was one of the first to know. Abhorring a power vacuum, he began impersonating him. The masquerade has held up thus far, but knowing that he cannot keep up the ruse forever, he is searching for a way to 'retire' as Khalid and groom himself under his true identity as his 'successor.' 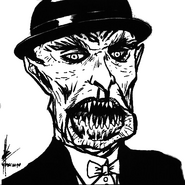 From Chicago by Night Second Edition. Art by Joshua Gabriel Timbrook
Add a photo to this gallery

Retrieved from "https://whitewolf.fandom.com/wiki/Cedrick_Calhoun?oldid=281966"
Community content is available under CC-BY-SA unless otherwise noted.