Catherine Blass is a mage and the signature character of the Virtual Adepts.

Little is known about her origins. She's been called everything from information broker, reality deviant, ontological terrorist, to stone cold bitch. Her trademark is an insanely mercurial personality and almost total disregard for any social boundaries. Catherine claimed that her Avatar has a dual nature – "Ix Chel" and "Ixtab" – life and death. She rapidly became known for her provocative and taboo-breaking shows.

A recently liberated report from the New World Order gives at least three contradictory reports about her origins. Of course, they also report her death in each one, an event which many people believe was (a) not fatal (otherwise she would not be here, would she?) and (b) responsible for her Awakening.

Regardless of which of her origins is actually true, Catherine did emerge unharmed and very much alive in the early 1990s as a performance artist. She rapidly became known for her provocative and taboo-breaking shows, the most famous of which, "Rage on a Meathook", was banned in Washington, D.C. (the official charges were obscenity, sexual solicitation, and slander). In the show, her body was wired for sound and flogged by an audience volunteer. She shattered video monitors with a four-octave scream, which the Sleepers interpreted as brilliant technological wizardry. What are Catherine's alleged goals? Beyond the satisfaction she seems to get in shocking people, Catherine has been using the energy generated in such performances to locate missing Nodes. Her performances are carefully designed Correspondence rotes set to trace the flow of Prime and then "tag" it for fellow Reality Coders to exploit. Her bizarre methods, using artistic expression as a guide, allow her to find Nodes when normal Adept rotes cannot. Since she travels so often in so many interesting circles, Catherine also makes a living trading information. Adepts seeking her advice can contact her at any rave local to the town she is in. If they speak her name and their basic need, she will appear within a couple of days to cut a deal. The deals are always simple – information for information. She will request certain things from the Adept who needs her. Once the Adept ponies up Catherine's needs, she will retrieve the information the Adept wants.

Online, Catherine goes by two handles, X-Cel or X-Tab. Both are based on Mayan goddesses. X-Cel, the more moderate of her two avatars, follows the path of the Mayan Moon goddess. She can be gentle, protective and merciful, and appears on the net as a woman dressed as a traditional Mexican nun. When she is violent, X-Cel usually manifests it by flooding her opponent with information. As X-Tab, based on the Mayan goddess of suicides, Catherine gets as violent. Her most common X-Tab image is that of a beautiful hanged woman with blue-tinged skin and her tongue lolling out. Adepts do not generally run into X-Tab. Catherine saves that one for people she is going to kill. Because of her strange proclivities, Catherine gets along with several different Traditions, notably the Cult of Ecstasy, the Dreamspeakers and the Verbena. It is also been rumored that she is quite close to Mark Hallward Gillan, an Order of Hermes mage, whom she allegedly once took as a lover.

Catherine has a stunning appearance, bearing a combination of both Eastern European and Hispanic features that give her an exotic and unique beauty. In her late 30s, she is about 5'6" tall and around 135 lbs. If she is deeply into the X-Cel or X-Tab persona, she will dress like her online icons in realspace, appearing as a traditional Mexican nun for X-Cel and as a hanged woman for X-Tab. 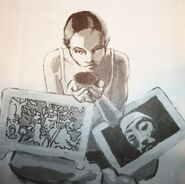 Retrieved from "https://whitewolf.fandom.com/wiki/Catherine_Blass?oldid=224008"
Community content is available under CC-BY-SA unless otherwise noted.