Carolina Valez is an eighth-generation Lasombra and childe of Tobias Smith who acted as the Archbishop of Montréal from 1992 to 1998. Her pack is known as the Lost Angels.

Appointed to her office by Cardinal Kyle Strathcona, she stepped down from her position only six years later during one of the Sabbat Inquisition's witch-hunts. Valez earned her reputation while acting as an undercover agent in the Californian Anarch Free State. Her casual relations with mortal and anarchs in Montréal is often seen as a personal weakness by her Sabbat fellows, especially since she shuns unnecessary violence and the blatant display of her Cainite state. Even though some of the more vocal members of the Sabbat regard her as weak, Valez is a cunning and clever manipulator who often overemphasizes her "weakness" to distract those who mistrust her from her true motives.

Valez's best kept secret is her relationship with her mortal grandchild Josefina. During her circuit of California she ensured that Josefina would follow her trail and kept her close to remind her of her former beauty. Valez looks after her granddaughter and rescued her from the clutches of the Sabbat repeatedly. Josefina on her part feels like she is being watched by a "guardian angel," and she has become something like an amateur occultist to learn more about her protector. This notion makes it harder and harder for Valez to keep Josefina from drawing the Sabbat's attention. Valez is in a precarious situation, trying with all the means necessary to keep the city from being torn apart by the inner turmoil within local Cainite society.

In 1998, the Sabbat Inquisitor Mercy stepped up her investigation into the accomplices of notorious Montréal-based infernalist Sangris the Serpent, who had seemingly been executed by the Inquisition in 1992. In reality, Sangris had survived, having transferred his spirit into the body of Inquisitor Santiago DeSoto and forced DeSoto's soul into a new body. Cairo, a missing Inquisitor who had been forced into infernal servitude by the disguised Sangris, approached Valez, hoping to trade information in exchange for a guarantee that the Inquisition would spare her. Although Valez agreed to the deal, Mercy refused to grant Cairo any clemency. Once the ex-Inquisitor had given Mercy the information she possessed, she was executed, but all of the other Cainites subsequently tried for similar acts of complicity were spared.

Valez quickly realized that her own position was in jeopardy, particularly if (or, more likely, when) the Inquisitors learned that she had been secretly protecting Josefina. Acting quickly, she cut a deal with the ambitious Inquisitor Alfred Benezri: in exchange for a guarantee that the Inquisition would not target her, she would step down and give the archbishopric to Benezri after the formality of a Monomacy duel. Thus, Valez retired from public view, now merely an abbot and the custodian of her pack's communal haven.

Valez allegedly voluntarily sacrificed herself to placate Camarilla elders, so that the younger Lasombra could join the ranks of the sect.

Path of Honorable Accord 6 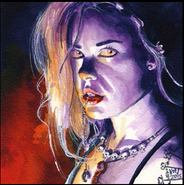