Carna is the former Regent and Primogen of Clan Tremere in Milwaukee and one-time Prince of Marseilles. By now, she leads House Carna, a splinter group from the main Clan with sympathies to the Anarch Movement.

Originally a peasant girl from a dysfunctional family, Carna was taken up as the blood doll of a Tremere Prince who took her to her residence. Her time with her one-time lover proved to be painful, since he repeatedly abused her and later abandoned her to feed from others of his herd. One night he entered her chamber, furious for some slight of his clan superiors against him. In rage, he Embraced Carna as revenge, believing that she would have an even lesser standing within the clan than he, since she was a woman.

After having been taken to Vienna, Carna worked to earn her standing within the clan, eventually even managing to claim Praxis over Marseilles. In time, she became disillusioned with the Jyhad, voicing concerns that it might never end. Other clan members mocked her for such views and she was transferred to Milwaukee. Despite being made both Regent and Primogen, Carna knows that her work is merely to distract the other clans from the studies conducted by more studious members of the chantry. She herself answers to an agent of the Inner Council, the assassin Victor.

At an unknown point in time, Carna found the Book of the Grave-War (secretly aided by the Malkavian Jacob), a noddistic text that revealed to her how she could break the blood bond that tied her to the Pyramid. When the other primogen suspected her of turning antitribu, they staked her and delivered her back to Victor. Carna apparently managed to slay her supervisor. Assembling a group of followers around her, she left Milwaukee, moving westwards to the Anarch Free States.

By the time of the Second Inquisition and the Beckoning, Carna has amassed several followers around her. Rejecting the traditions of House Tremere, she instead turns towards paganism, witchcraft and modern chaos magicians as alternatives. In secret, she fears the vengeance of Tremere for her rebellion and hopes to sway the rest of the Clan to her ways. Carna's research into blood magic has opened her ways to manipulate the blood bond in greater ways, even circumventing the new Clan Curse that has spread through the Tremere.

Carna has straight blond hair that hides half her face. She looks a little sultry and uses this to disarm the men she meets socially. Many know her to be a true shark and avoid her. The truth is that she is growing tired of all the intrigue. 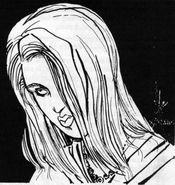 Carna from Milwaukee by Night

Retrieved from "https://whitewolf.fandom.com/wiki/Carna?oldid=235526"
Community content is available under CC-BY-SA unless otherwise noted.