White Wolf Wiki
Register
Don't have an account?
Sign In
Advertisement
in: Vampires of unknown generation, Cappadocian, Giovanni,
and 6 more

De facto leader of the Hecata
The Capuchin is a devilish enigma even among the secretive and duplicitous world of vampires. Garbed in the robes of a Capuchin monk, he has extraordinary connections within the Catholic Church. Obviously powerful and of low-generation, the Capuchin cut many deals with clan Giovanni, even though he does not seem to be a Giovanni himself. He now occupies a role of guidance and leadership in the fledgling Clan Hecata.

Exactly who (or what) the Capuchin is is open to wide debate. The most common candidate is Lazarus. They have similar portraits in their respective clanbooks, and both are survivors of the Giovanni purge. Japheth Cappadocius is a more remote possibility – largely supported by the biography of Unre in Children of the Night, although he was known to be diablerized by Claudius Giovanni in Giovanni Chronicles I: The Last Supper.

After the diablerie of the Antediluvian, Cappadocius, and the hunting down of the remaining Cappadocian vampires, the Capuchin approached the Giovanni elders with a deal. In exchange for knowledge of Necromancy he would provide access to the Vatican's library of hidden books. Over the centuries the Cainite would appear with a new artifact or tidbit of information in exchange for another boon.

The Capuchin apparently also aided the Tal'Mahe'Ra, who see him as frustratingly mysterious, but otherwise are convinced that he serves the aims of the sect.

The Capuchin's most significant, and damning, tidbit of information was the location of the True Vessel. That the Vessel could be found implied that Claudius Giovanni had lost it while ransacking Erciyes for information. As a result Claudius Giovanni met a gruesome death by his father in a frenzy and the Capuchin was allowed to take away his corpse for his own purposes.

The Black Hand: A Guide to the Tal’Mahe’Ra states that the Capuchin is more than one individual: Japheth (who has been a wraith for over five centuries since his incomplete diablerie), Lazarus and Byzar who together make up the Cult of the Capuchin. Together, they work to bring Gehenna, reduce the world to rubble, and reconstruct it.

Formation of the Hecata

While his true identity remains unknown, the Capuchin is known by the several different bloodlines that have formed the Hecata: To the Harbingers, he is a savior; to the Samedi, a rival and confidante of the Baron; to the Giovanni, he is either a demon come to hurry them, or a dealer in antiquities who once traded Vatican tomes and secrets for necromantic ones.[1]

He has become involved in guiding Clan Hecata, essentially acting as its de facto leader. He is suspected by some of being directly responsible for the death and diablerie of Augustus Giovanni, a distinct possibility, considering that the storm of wraiths and spectres released by his apparent death was partially responsible for the Family Reunion.[1] 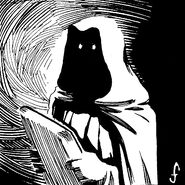 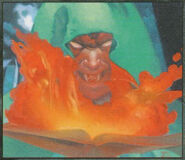 Visit from the Capuchin VTES card. Art by Dennis Calero