Cappadocius was a powerful Cainite Antediluvian that sired the Cappadocian clan. In 1444, he was diablerised by his childe, Augustus Giovanni, as part of a grand scheme to achieve godhood. His attempt seems to have failed.

Cappadocius was sired in First City, chosen for his intellect and his interest in matters surrounding death. As a clan founder of the Cappadocians, some of whom would later be known as the Harbingers of Skulls, he was always a mystic and a dreamer, leading both to the grandiosity of his plans and the depth of his mistakes.

Most people assume that "Cappadocius" is an epithet for his point of origin (the Anatolia region of Turkey) rather than a personal name: whenever he was asked about his origins, he would only say that he was "from Cappadocia". The names of most of the third generation are lost to history, but Cappadocius' name is unknown even to his contemporaries. To hear Cappadocian scholars tell it, the priest who would become Cappadocius chose to abandon his original name and take this one even before his Embrace, and this is the only name he offered to Caine and the second generation. Some even say that Cappadocius goes by no true name because he himself no longer knows it!

In his days as a mortal priest and man of faith, Cappadocius had his own dealings with the dead, a conversation here and there with spirits of those gone, and he had made several enemies in his time. When the Antediluvian died briefly during the Embrace, those spirits were waiting for him in the lands Beneath, and they attempted to cling to him, to prevent him from returning to his body when the curse of Caine took hold. It is said that, to some extent, they succeeded.

Part of Cappadocius never returned from the underworld. Much of his knowledge and self-awareness were lost in that faulty Embrace, and the being who returned was not quite he who began the journey. Cappadocius' very soul had been fragmented, and that is why he harbored such a fascination for the dead: Even when he himself did not realize it, he was constantly seeking the missing portions of himself. His progeny speculate that this flawed Embrace is also the reason for Cappadocius' deathly appearance; because the spirit that returned to his body was incomplete, it was unable to fully stave off the decay of the grave. It may also be the reason that Augustus Giovanni could not devour his soul completely, as a part of it had always been in the Underworld.

In any event, Cappadocius spent most of his time in the Second City seeking answers to his various and sundry questions of the nature of life and death, studying ways to question the spirits, and – in his spare time – advising the other Cainites on any matters about which they chose to query him.

Cappadocius was unusually active for an Antediluvian; he embraced Christianity (although with his own particular twist), and was actively working with his childer until his final death. It was to his own undoing to order the Embrace of Augustus Giovanni, bringing the Giovanni in as a bloodline of the Cappadocians, and blissfully ignoring all the evidence that his newest childe was making a beeline for his throat (although it is very likely that he knew it from the start). Thus, on April 4th, 1444, Cappadocius was willingly diablerised by his childe, Augustus Giovanni.

That was not the end of the ancient, however, for Augustus Giovanni did not manage to absorb his soul during the diablerie. Some time later, information was brought to the Giovanni's attention by the Capuchin. It is believed to hold a small amount of Cappadocius' blood and soul sealed by Japheth and Constancia. The Capuchin also told him that it had been hidden in the Erciyes library but was lost when Claudius Giovanni ordered the burning of the temple-fortress.

Also, in 1999, he haunted the Giovanni of Boston with Spectres servants. It is said that as an Unfettered Spectre, he seeks revenge against both the Giovanni for their attempt at diablerie, and the Ventrue for instigating the plot that led to his death, and that he would not object to mindless violence. In Giovanni Chronicles IV: Nuova Malattia, the Children of Isaac try to put him to rest with a ritual from Marianna and it succeeds.

During Gehenna, his soul was consumed when the Sixth Great Maelstrom hit the Shadowlands.

A few scholars believe that Cappadocius does have another name, the name of Ashur. Others even say that Ashur is the name of Cappadocius' sire, although no second-generation Cainite exists in any myths or records by that name. Did he exist at all?

Is this, in fact, the name of Cappadocius? If so, is it his true name, or just another alias this most enigmatic of ancients picked up along the way? None can say for certain, of course, but it is worth noting that at no time has anyone heard Cappadocius himself make use of that name; it has always been ascribed to him in writing by others.

It is also worth noting that some credit a vampire by the name of Ashur with the creation of the depraved Baali. If this is true, would that make the Cappadocians and the Baali cousins who share the same grandfather? Brothers who share the same patriarch? Or could their bonds run more closely still?

It has never been verified that Ashur is Cappadocius, as some theories hold that Ashur may have been Saulot or an unknown "other." However, in Lair of the Hidden, the lineage of the Cappadocian Inconnu character starts with the name Ashur.

Other than Ashur, Cappadocius has also been called or referred to as Abu Lazar, Sargon (supposedly the name he used in life, as revealed in Dark Ages Clan Novel 3: Cappadocian), and Laodice (the sire of Byzar/Mahatma in Children of the Night). The choice of the name Laodice is particularly interesting as it is a feminine name, suggesting Cappadocius may have taken on different forms as well as different names.

Anubis: being a reference by the Setites

Cappadocius is described in Giovanni Chronicles I as a man with a long beard who emanates some sort of glow. With a luminous, translucent presence, he wears a white monk's robe and a beatific smile, speaking in a strong but gentle voice. While he seems to be sitting down, perceptive individuals would notice that he actually floats less than an inch above the chair.[1]

From Giovanni Chronicles I: The Last Supper

From Giovanni Chronicles I: The Last Supper 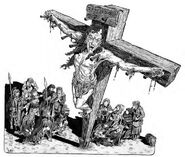 Cappadocius, depicted as a Christian, from Players Guide to High Clans. Art by David Day