Calebros, the Erstwhile Prince of New York, is the signature character of the Nosferatu clan in Vampire: The Masquerade.

Calebros has been the most powerful Nosferatu in New York City. He is a reclusive vampire, typical of his clan, and remained somewhat aloof from the Kindred society of New York even while he served as Prince pro tempore of the city. Soon after taking on the office during the Battle of New York, he abdicated it to the immediate interest of all of New York's powerful vampires.

Despite being the most influential Nosferatu in New York for the past 50 years since his sire disappeared, Calebros is remarkably anonymous beyond his clan, and that is the way he prefers it. He maintains order in his warren beneath Manhattan while also coordinating plans and information for his brethren across the Americas and parts of Europe. As the reluctant, temporary, and now former Prince of New York, Calebros has not slept well since putting those duties behind him.

Calebros remembers little of his mortal life. As a child, he was snatched away by the Nosferatu and held in prolonged captivity before his Embrace. To his thinking, he has always been Nosferatu, and the indistinct nature of his days as kine precludes notions of existential angst. He exists as the quintessential Kindred, and his efforts have been rewarded by his steadily increasing status among his clanmates and Damned peers.

His love of academia and solitude are very much apparent and his abdication of the rule of New York City was a very welcome step by Calebros. It was less welcome among others in the city, however, who saw it as an irresponsible and selfish move with the Camarilla's position in the city so tenuous. In particular, Uncle Smelly is frustrated with the man and views Calebros as a pawn used by Camarilla elders who did nothing to help his clan's position in the city. 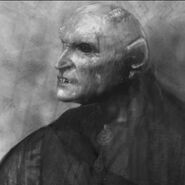 From New York by Night 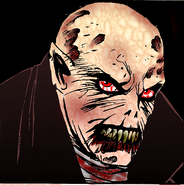 Retrieved from "https://whitewolf.fandom.com/wiki/Calebros?oldid=258743"
Community content is available under CC-BY-SA unless otherwise noted.