Basileus of the Antonian Ventrue

Caius was an influential Ventrue of Constantinople during the Dark Ages. He used to be Emperor Constantine's lieutenant. During the Fourth Council of Constantinople in 796 CE, he and Septima Dominica proposed the destruction of their sire, Antonius the Gaul.

He became the leader of the Antonian Ventrue faction after the destruction of Antonius, but perished himself some centuries later, searching for Michael while Constantinople burned under the Fourth Crusade.

In his mortal days, Caius was the lieutenant of Constantine and his left-hand, acting on orders that would besmirch the future Emperor's reputation, like slaying the firstborn son of his general when he became a threat to his power. The early Trinity was fascinated by his dedication and Antonius, who found the loyalty and efficiency of Caius much like his own, decided to support him. Once Constantine had become Emperor, the Ventrue embraced Caius, who was an eager student. When Constantine eventually died, Caius felt an inner void and looked for someone to fill it. He fell victim to Michael's charisma, eventually only serving his sire in order to replace him on his lover's side. The only one to whom he confessed this mad love was the Cappadocian Alexia Theusa, who was herself no stranger to impossible infatuation.

When Antonius began the Iconoclast Movement, Caius saw his chance to dispose his sire. With the aid of his broodmate Septima Dominica, he presented the plan to Michael and the Dracon, who agreed in order to save their Dream. Caius staked Antonius and left him for the sunrise. Michael, however, could not bear the thought of sharing the bed with the person who killed his former lover and became more and more withdrawn from the mundane affairs of the city.

Despite his position as Basileus of the Antonian Ventrue, Caius struggled with the responsibilities, feeling deprived of his only chance to be with Michael. When Septima Dominica was killed in 1001 by witch-hunters, he lost control over his duties, which were exploited by the Narsene Lasombra. In 1185, Caius was forced by them to grant them extensive rights following the Latin Riots. He only kept himself in power by playing his various enemies against each other.

Caius did not survive the Fourth Crusade, where he fled to the Hagia Sophia amidst the burning city, searching for Michael. 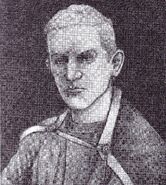 From Bitter Crusade. Art by Rik Martin
Add a photo to this gallery

Retrieved from "https://whitewolf.fandom.com/wiki/Caius?oldid=221648"
Community content is available under CC-BY-SA unless otherwise noted.