Cairo, born Elisa Karini, was a Ravnos antitribu of the 10th generation, a resident of Montréal and a member of the Sabbat pack Les Orphelins.

Knight Inquisitor Cairo arrived in Montréal in the aftermath of Sangris' trial to search out any hidden accomplices. While Krieg (Elisa's Nosferatu antitribu partner) simply appeared in the city as a nomad, she infiltrated the circus of the Tzimisce Zarnovich, assuming the alias of "Sonya, Mistress of Illusions".

A follower of the Path of Cathari, Elisa also took advantage of her visit to learn from the Widows. As the months passed, Elisa entered the dark world of the Widows and her duties as an Inquisitor took second place to her quest for enlightenment as a Cathar. Unfortunately, Pierre Bellemare was ready to take advantage of Elisa's distraction.

Pierre uncovered Krieg's true identity in 1993. After 13 nights of torture, the Nosferatu antitribu surrendered the name of his partner. Pierre then lured Elisa to the ramshackle tenement building in Old Montréal that hid Metathiax's Blood Circle. Her Inquisitor's instincts re-surfaced too late, and she was overwhelmed by a swarm of diseased rats. Not content to kill his victim, Pierre drew on the power of the Decani to rot Elisa's body and re-formed it. The demon's power also chained her soul and will, turning her into Cairo, the perfect slave.

Pierre never realized that Cairo was a skilled Thaumaturgist. She has spent the years since her imprisonment loosening the chains around her soul. The pack's weekly Vaulderie strengthens Cairo's bondage, but for the last three months she has worked herself relatively free for a few nights a week.

Not yet strong enough to actively challenge her tormentor, Cairo is trying her best to subtly expose Pierre's infernalism and stop his corruption from spreading. She is desperate to get to Ezekiel and warn him, but her efforts have been inexplicably thwarted by Santiago DeSoto.

Cairo saw her chance when Knight-Inquisitor Mercy searched for Bellemare. She approached Carolina Valez, offering information on Bellemare in exchange for protection. Valez accepted, but could not hold her part of the deal when Mercy accused them both of infernalism. Cairo was sent to the headquarters of the Sabbat Inquisition near Mexico City to be used as a torture dummy.

Following Pierre's orders, she is a tough-as-nails Sabbat. As long as Pierre demands it, she tears into whoever antagonizes him or his pack. Below the surface, she longs to free herself and continue to learn the ways of the Cathar Widows.

Cairo's spiritual slavery makes it difficult for her to use most of her subtler powers, especially when under orders from Pierre. She does, however, employ Chimerstry to simulate an attack with a small flamethrower. 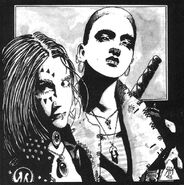 Cairo and Sister Evelyn, from Montreal by Night. Art by Christopher Shy
Add a photo to this gallery

Retrieved from "https://whitewolf.fandom.com/wiki/Cairo_(Ravnos)?oldid=229957"
Community content is available under CC-BY-SA unless otherwise noted.