View source
watch 02:52
Roblox: DeepWoken - The Loop
Do you like this video?
Play Sound

Caine, also known as Cain, is considered to be the first and most powerful vampire in the mythos of the World of Darkness. Like his Biblical namesake, he is the firstborn son of Adam and Eve and the older brother of Abel and Seth. He was cursed with vampirism by God[4] and His angels as punishment for murdering Abel and lying to God.

Before the formation of the Camarilla, most vampires referred to themselves as "Cainites" in recognition of their patriarch.

The bulk of Caine's history is covered in the Book of Nod, the Erciyes Fragments, the Lilithian, and the Luciferian. These books conflict on Caine's motives, but all agree he killed his brother Abel. The Luciferian describes how Caine gave himself a "gift," and the gift was delusion. Using this gift, he thought he killed Abel in an act of love when it was really an act of hate. He used this gift to make pride out of shame, which resulted in being outcast. The Gangrel scholar Beckett is also known for interpreting the Caine mythology as a conflict between farmer and hunter tribes.

A farmer named Caine prepared a sacrificial offering to God, of his finest fruits and vegetables. His brother Abel also prepared a sacrificial offering, it being of the finest animals that he had raised. Either there was a dispute over whose offering was better, or God really favored Abel's over Caine's. The final result ended in Caine "sacrificing" Abel on an altar, his brother being the "finest" offering he could give. As punishment, Cain's "Father" cursed him with a mark, and cast him out to wander in darkness in the Land of Nod.[5]

Roaming the Land of Nod, Caine encounters Lilith. She notices a swirling stain in the air around him, a mark of some dark unfathomed power: murder. He possessed the power to kill higher beings — not to hunt as Adam had, but to kill as had Jehovah.[6] She was amazed, for he bore no signs of godhood but wandered in the dust like a lesser beast. Seeing that he is cold and hungry, she welcomes Caine into her warmth. Lilith identifies herself as Adam's first wife, the original wife of Caine's father. After staying with her for some time, the two become lovers. He realizes that she has powers and magic that he too would like to possess, so he pleads her for these gifts. The hesitant Lilith then prepares an Awakening ceremony by cutting herself with a knife, bleeding into a bowl, and giving it to him so that he may drink.[7]

After Caine partakes of Lilith's blood, he is visited by three angels who are agents of God. Each angel offers Caine a chance to repent for the murder of Abel, but Caine rebuffed them out of pride. Michael, when denied, cursed Caine and his childer to fear his living flame. Raphael cursed Caine and his childer to fear the dawn, as the sun's rays would burn like fire. Uriel then cursed Caine and his childer to cling to Darkness, drink only blood, eat only ashes, and be frozen at the point of death, cursed so all they touch would crumble into nothing. A fourth angel, Gabriel, then appeared to offer the way of Golconda, the only way to "light", by the mercy of God. After the experience, Caine becomes officially "Awakened", possessing the following Disciplines: Celerity, Potence, Fortitude, Obfuscate, Dominate, Presence, Protean, Animalism, and Auspex. Caine then became aware of the Path of Blood, the Final Path from which all paths stem. And with all these powers, he breaks his bond with Lilith and leaves her.[8]

Caine continues to wander the Land of Nod in loneliness. The memory of his sin drowned him in sorrow. It was not for many ages until he decides to be amongst mortal men again. His powers and his mark were well known to mortal men and some even worshiped him. Finally, Caine settled [9] in a small agricultural community, named Ubar. It was here, in this First City that he became the Dark Father.

Caine finally settled in a city, once known as Ubar. It was inhabited by the "Children of Seth" and ruled by King Enoch. The people of Ubar were aware of Caine's mark and both marveled and feared his power and thus came to worship him. Upon arrival to the city, Enoch relinquished his kingship, so that Caine may rule instead.[10]

According to a Toreador legend, being amongst the mortals, Caine noticed a couple who were very much in love. Seeing their love amplified his own loneliness and sin. After having dwelt on his sin for an eon, Caine thought that maybe he could reconcile something in his nature by Embracing them with the gift of immortality, so that their love would live for all eternity. However, after having been Embraced, the lovers discovered that they could not have children together. In an act of despair, they both walked into the sunlight to their Final Death. Caine was so heartbroken over the event that he forbade anyone to speak their names. Thus, their names were lost to history.[10]

The former king, Enoch, desired Caine's power once more and requested it as such. However, Caine showed some reluctance because of the loss of the lovers he had Embraced decades ago and Uriel's warning. Yet the raging of the Beast within, the yearning to be with others like him, and Enoch ultimately begging for the Embrace, Caine turned the young man. In honor of his newfound vampiric childe, Caine declared that Ubar now be known as the City of Enoch.

After some time, Enoch desired Kindred brethren. With Enoch's insistence, Caine Embraced his second childe, Irad, imparting to him a strength unlike any other. Irad thus became Caine's arm, a commander of armies. Soon to follow was Zillah.[11]

Zillah was so beautiful, Caine could not resist the Embrace. Interestingly, even after the Embrace, Zillah did not desire him. It frustrated Caine to the point that he was ripping his hair out of his head. He did anything and everything to make her desire him. Yet, she would not have him. Finally, Caine sought the Crone's magic, who ultimately tricked him into a blood bond, she forced the First Vampire to Embrace her. The Crone sent her new thrall away, telling him that his blood would have the power to bond others as Caine himself was bonded to the Crone. The discovery of the blood bond was what finally made Zillah agree to marry her sire Caine.[12]

For a year and a day Caine labored in the service of the Crone. However, Caine never again drank from the Crone's blood during that period. One night, he tricked her by saying he had terrible dreams in his sleep, and was fearful that his childer lusted after his blood. He asked the Crone for secret knowledge to protect himself against his progeny, and in response to his pleas the Crone went to a tree made of gopher wood and broke off a limb, sharpening it into a stake. She told Caine to pierce the heart of his wayward childe with it to render him still. Caine thanked the Crone, and using quick movements Caine seized the stake and drove it into her heart, breaking the blood bond in the process. He kissed her cold withered lips and left her to meet the sunrise.[13]

Now there were three Second Generation childer who co-existed in the City of Enoch: Enoch, Irad, and Zillah. They in turn learned the ways of making progeny and had Embraced the Third Generation. Under Caine's order, he declared it law that no more childer be made. Supposedly they obeyed and the city prospered for ages, becoming the First City of vampires.[3]

The city's economy thrived on the technology and the agricultural "know-how" that Caine brought to the First City. One, having wandered throughout the Cradle of Civilization, he was able to bring Sumerian technology, namely "the wheel". Two, being a farmer most of his life, Caine had cultivated wondrous and perfect groves. So for generations, under Caine's rule, the economy prospered, and the city became a mighty Empire.[10] The Third Generation Antediluvians even built statues, shrines, temples, a grand library, and pools all surrounding a large five level palace, that Caine ruled from, upon his lofty ivory throne.[14]

The Deluge changed everything. It destroyed the City of Enoch and all of the "Children of Seth". Caine was so despondent, that he disappeared. His surviving childer and grandchilder sought him out, and when they found him, Caine told them to go away. Left to fend for themselves, the Antediluvians ended up "killing" Caine's second generation childer. When Caine discovered what happened, he sought out the Antediluvians who had rebuilt a new city, known as the Second City. Unbeknownst to them, the Dark Father cursed his descendants with the characteristic weaknesses of each clan.[15]

According to Noddist mythology, there are claims that Caine will return at the end of time to judge his descendants: the Antediluvians and all vampires descended from them. This event is known as Gehenna, the end of all vampiric races.

The Sabbat's epithet, The Sword Of Caine, refers to their belief that they will aid Caine in striking down the Antediluvians when Gehenna comes.

The Camarilla, however, deny any existence of Caine, even going as far as concealing or destroying books that even refer to Caine's return, thus promoting skepticism amongst modern Kindred.

Caine's capacities are usually described as being outside the ability of the Storyteller system to model. Given that he is two generations beyond the power of the Antediluvians, it is reasonable to assume that he has completely mastered all Disciplines potentially to a greater degree than 3rd generation.

Caine was able to see when one of his children's Disciplines had worked on a human. He was also able to cancel the effects of any Discipline used in his vicinity. It was this total mastery of all Disciplines that kept Caine in power, truly, for although he was a decent king and an honest law-giver, his Disciplines ensured that the rest of the powerful kindred stayed in line. Caine had the ability to create new Disciplines on the spot if he wished. It is thought that his power to do this was the forerunner of the blood magic and its several paths.[16]

Almost anything else about Caine's attributes follows the Biblical description: if Caine is harmed, the damage is returned sevenfold. In addition, Caine is marked with a sign of God's displeasure.

One of the seemingly minor characters in Vampire: The Masquerade - Bloodlines may be Caine in disguise, having orchestrated the entire plot of the game beforehand.

Caine also appears in Gehenna: The Final Night, in a general positive interpretation under an assumed name. This Caine travels with Beckett while witnessing the end of vampiric civilization.

Caine figures in one scenario in Gehenna, where he is explicitly targeted and drawn out by Lilith for vengeance. In that scenario the Biblical curse does apply, and Lilith prepares a victim to strike the killing blow on Caine and then get squashed by the ineffable thumb of God. Caine is mentioned in passing in two other scenarios and presumed dead in the remaining one.

During the 13th century, Caine was revered in a trinity.[17]

In the modern era, many Kindred have different views of Caine, reflecting the trinity popular in the Dark Ages, albeit as individual interpretations and not three aspects of a single dark godhead:

Depending on geography, some vampires coming from a pagan background refer to a figure similar to Caine, although with another name:

The blood of Abel covers the altar

Caine wanders through the Land of Nod 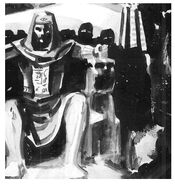