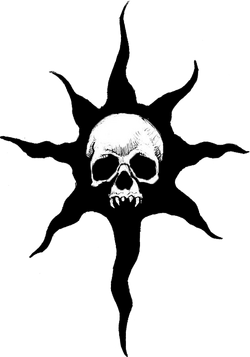 The Brotherhood of the Ninth Circle was an organization which existed in Los Angeles during the time of the Final Nights and led by the Toreador vampire Bishop Vick until its dissolution in 2004.

After Bishop Vick was embraced by an unknown vampire who left him, he had gained a warped view of the world and believed that no god would exist to tolerate such a thing. He proclaimed himself to be a god and sought to bring the end of all kind by spreading a plague with the help of his followers to kill the humans and transport them to the "Ninth Circle", and have unsuspecting vampires spread it. Vic had follower Brother Kanker spread the plague via the local homeless whilst follower Jezebel Locke spread it through interactions with prostitutes who answered her newspaper advertisement.

After both Kanker and Locke were destroyed by a neonate vampire who was searching for the source of the plague at the behest of the local Anarchs and Maximillian Strauss, and another killed by the Anarchs near the convention center, Vic was then destroyed by the neonate in his headquarters in downtown Los Angeles.

Retrieved from "https://whitewolf.fandom.com/wiki/Brotherhood_of_the_Ninth_Circle?oldid=268179"
Community content is available under CC-BY-SA unless otherwise noted.