Bret Stryker was born good looking, and he knew it even then. He got into bodybuilding in 1980 when he was 16 and kept up with it – but only to the extent that it made him even better looking. He never liked to work very much, and so he slipped very easily into crime. In his south side neighborhood it was almost expected. After being jailed for holding up a 7-11, he learned the downside of being so good-looking. Still, when the opportunity presented itself for him to make some easy money as an exotic dancer after he got out of jail, he jumped at the chance. Ever since, he has relied on the generosity of other people, male and female, who support him because of his looks and his willingness to provide certain favors.

Something made him uneasy about Annabelle's offer to take care of him. She was much better-looking than most of his patrons, but she had a way about her that disturbed him like no one else ever had. However, after one night with Annabelle, he knew he wanted no one else. With her he experienced pleasure beyond words. Within a week Annabelle had decided that this beautiful dancer would be the second neonate promised her by the primogen. She Embraced him without warning, and told him afterward what he had become. After a short period of horror and shock he adjusted well enough, and grew to enjoy his new form.

Annabelle had been angered the rejection of her childe Sophia by her clan cousins, and saw in Bret a chance to snub her nose at them. She has forced him to continue his dancing and continually tells him and others what a great artist he is. Most of the matrons of high society have seen him dance at one time or another, but they treat him with contempt or feigned respect. Annabelle only really requires his services as a bodyguard, and has no interest in anything else about him. While Bret's attraction to Annabelle has waned slightly, he is now blood bound to her and will do anything she says. However, Bret always was petty, and in the absence of orders from Annabelle he is as likely to use the situation to much to her disadvantage as to her advantage. However, she has made him pledge to keep her safe from harm, so there are limits to what he can do. Bret also maintains a life among the mortals; he still dances and takes his favorite vessels from women who come see him.

He tends to be very sullen at Annabelle's parties. He will sit in the corner and glare at anyone who looks like they are going to talk to him. That is, unless he thinks he can get something he wants from someone – then he will be one of the most charming young men you have ever met. It can be quite startling to watch the transformation. 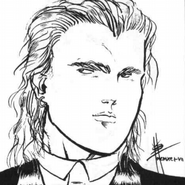 Retrieved from "https://whitewolf.fandom.com/wiki/Bret_Stryker?oldid=220466"
Community content is available under CC-BY-SA unless otherwise noted.