The Book of Nod is a collection of ancient texts, viewed as sacred to Noddist Cainites.

The Book of Nod consists of multiple recensions and fragments that have been reassembled by various Kindred scholars, such as Aristotle deLaurent, Beckett, and Sascha Vykos. There have been attempts to compile these texts into one book, such as the chapbook produced by an obscure Georgia publishing house. But, traditionally, the primary transmission of Caine's story is oral (through Sabbat ritae or storytelling among the undead), while the texts with the most important events in Cainite history are heavily guarded to protect the Cainites. It must be mentioned that one's own personal beliefs aside, the texts and notes that have been passed down through the ages should be treated with great caution.

Known attempts to assemble the Chronicles of the Book of Nod include:

There are numerous open questions concerning the history of the Book of Nod. Its author is unknown, though Malkav, Saulot, and even Caine are often cited to have written parts of it, if not the whole thing. However, it may have had many authors and editors over the thousands of years since the time of the events which it describes, placing great doubts on its veracity. Some consider the entire book to be myths or lies, a story vampires invented to explain their existence or a tool used to mislead others into thinking and acting a certain way. Adding to these doubts is the fact that many writings attributed to the Book of Nod are incredibly vague or contradictory, sometimes appearing to be outright misdirection – which creates some large (and often violent) schisms of interpretation between Noddist groups. The oldest piece of the Book is dated to just before the time of Sumer, around 4500 BCE.[4]

The Camarilla has a policy of denouncing Noddist lore and persecuting those who spread it. Any found pieces of the Book of Nod or similar texts are either destroyed or quietly stashed away to be studied by the sect's leaders. Nevertheless, the Book of Nod continues to be sought by many Kindred in the belief that it holds truths of vampiric nature and prophecies of the future.

The Chronicle of Caine

The Chronicle of Caine comprises the following fragments: The First of Times, The Coming of Lilith, Lilith's Magick, The Temptation of Caine, Zillah's Tale, The Tale of the Crone, and The Tale of the First City. Although Caine is identified with the "Cain" mentioned in the Book of Genesis, these Tales are not to be comparatively accurate with standard biblical canon. In his own words, Caine relates what his motives were that led to his curse, giving his personal viewpoints of the events that surrounded the days after the Fall of Man, and his history of being the Dark Father.[6]

The Chronicle of Shadows

The Chronicle of Shadows are a collection of pieces and fragments that are debated to even be part of the Book of Nod. There are analysts who claim that this section had been diluted by the scholars and writers of Carthage, who took poetic license to write down "Caine’s Laws." It has even been said that the Chronicle of Shadows is just a collection of propaganda created by the Camarilla to support its tyrannical reign. While some believe this to be an elaborate Malkavian prank, others believe these texts came straight from the Dark Father himself, especially the thirteen commandments that were provided on authentically aged tablets.[7]

The Chronicle of Secrets

The Chronicle of Secrets is the shortest collection of the three Chronicles. It contains prophecies and visions of an event called Gehenna. It seems to some, that the worries of this event have passed down from Generation to Generation and have caused a ripple of paranoia and fear that continue to reverberate through the Cainites and the Canaille.[8] The Camarilla would rather see these texts just burn. 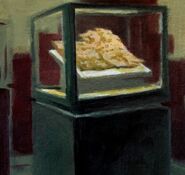