Rat
The Bone Gnawers are one of the Tribes found in Werewolf: The Apocalypse. The scavengers and survivors of the Garou, the Bone Gnawers are seen by the other tribes as little more than mongrels who sift through the waste of mankind. The Bone Gnawers see themselves as underdogs, waiting to triumph against overconfident foes.

The Bone Gnawers claim to descend from the underdogs of Garou society, their name itself being an insult from the alphas and more noble werewolves in the Garou Tongue. Many of the earliest Bone Gnawers were banned from their own tribes, seeking to redeem themselves by joining the lowliest among them who always fought on the front lines against the minions of the Wyrm. It was only during the Concord that these poor bastards joined and eventually formed the Tribe, but they refused the separation of Garou and humanity. Instead, they prefer to prowl in their cities, far from the houses and influences of the Warders of Apes. As a result, most of the more feral Garou saw the Bone Gnawers as Urrah, although the Bone Gnawers still avoid the webs of the Weaver as best they can.

Many of the early Bone Gnawers can be traced back to North Africa and India. It is recorded that they shared territory with the Silent Striders in Egypt, breeding with the scavengers native there and aiding them from time to time in their struggles against the Followers of Set. The result was that Set, even if he didn't curse the tribe as he did with the Striders, shattered their homeland and drove them off, forcing them to seek shelter in the territories of other Garou or even in some vampire-claimed areas. The Greek concept of democracy held special interest for the tribe and within Rome, they were known to fight against slavery and vie for influence with the other tribes and even sometimes claim it.

When Rome fell, the tribe scattered once again, all over Europe. Some served along the Get of Fenris and the other tribes in their war efforts, while others integrated into the downtrodden and outcast, protecting them and sometimes even making them Kinfolk. When the Plague ravaged the medieval world, the Bone Gnawers tried their best to aid the poor who suffered most under the illness, with the result that many Kin were accused of witchcraft during the Inquisition and put to the pyre. This decreased the tribe's enthusiam to help, although it didn't extinguish it.

When the first ships sailed off into the New World, many Bone Gnawers followed, hoping for a better world where they wouldn't be oppressed, aiding various revolutions in hopes to gain a little bit more influence for themselves. Using the American Revolution as a way to relieve themselves and found some Septs of their own, Bone Gnawers fought side by side with humans, in human form and without supernatural aid in order to preserve the Veil. In Europe, they tried to do the same with the French Revolution, but they did not succeed like they did in the USA. They also supported the Russian Revolution, although they quickly came to regret this when the vampiric Brujah installed the Soviet Union.

Most Bone Gnawers were involved with the World Wars in one way or the other. They were among the first to recognize the danger humanity now posed. More than any other tribe, the Bone Gnawers realize that these are the Final Nights, their chance to prove their worth to the Nation and the greatest battle against the Wyrm that will ever come to pass. Some shy away from this notion. Others embrace it to let it inspire them to heroic deeds, and most strive to survive, as they always have.

Since the days of Ancient Greece, Bone Gnawers tend to organize themselves in democratic communities. Experienced Bone Gnawers are elected to act as an "Elder" for a sept. This Elder is in no way obliged to listen to other sept members, but most do so, knowing that it is the support of the people that gave them their station. The most accomplished Elders are accepted as Tribal Elders, and usually addressed with the honorific "Father" or "Mother".

One camp is ostracized and banned among the Tribe:

Freedom and practicality rule above all else when it comes to the Bone Gnawers. They care little for the supposed superiority of Garou and are content to remain in the alleys, gutters, and sewers of man as long as it means they can live on their own terms.

Most Bone Gnawers are extremely savvy when it comes to surviving in the streets of man. No other tribe is as accomplished at urban fighting as the Bone Gnawers, and surprise is considered their primary tactic. Many Bone Gnawers encourage the ideas of their lesser status, as it can be turned into an advantage when their enemies underestimate them.

Although rare, there are septs of rural Bone Gnawers. They tend to lead simple lives, but still hold strongly to the ideals of freedom that their urban cousins share.

Bone Gnawers tend to be the most democratic of the tribes, often giving everyone an equal voice at a moot. Though renown and rank can be important to Bone Gnawer septs and packs, respect is usually given to the oldest and/or most experienced member of the tribe present. Many Bone Gnawers share their resources with their tribesmen freely, but this is not always consistent, particularly with the Rabble.

The rites and traditions of the Bone Gnawers are seen by other tribes as extremely strange and bizarre. Even though their rituals are unusual and rely strongly on human practices and pop culture, the Bone Gnawers take them as seriously as any of the more naturalistic rites of the other tribes, particularly as many of them grant advantages for survival as much as they do spiritual comfort.

Since 1540, the Bone Gnawers practice something called the "Ban of Man", in order to avoid becoming too entangled in humanity's affairs to successfully accomplish their task as Gaia's servants. The Ban is recited in the beginning of tribal moots, but its enforcement depends on the standards espoused by the local Elder. 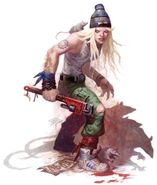 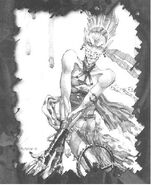 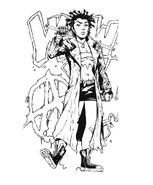