Bobby Weatherbottom, nicknamed the Hurricane, was a childe of Prince Lodin of Chicago, who later gained fame as the first non-Nosferatu to access the SchreckNet.

Weatherbottom was born in Cicero, Illinois and developed a fascination with computers in 1971. He eventually quit school and moved to Chicago into a run-down apartment, which he paid for via hacking bank accounts. Under the name "Hurricane", Weatherbottom became a famous figure in the hacker scene. When he was hired by Amanda Cersey, a woman from the higher society and a distant relative to Annabelle Triabell, to hide her tracks after she had embezzled money from a bank by shifting the evidence towards her father, he began to fall in love with her.

With his aid, she quickly rose amidst the ranks of the bank, but began to fear Weatherbottom for his near omnipotence. Through her, word reached the Toreador primogen Triabell, who mentioned Weatherbottom's talent to Lodin. The Prince, although having no understanding what a "computer" was, had learned of their growing importance in mortal society and the idea of a lieutenant that could control this strange new development appealed to him.

Weatherbottom had confessed his love to Amanda, who slowly began to reciprocate his feelings. When he returned to his home, Lodin awaited him and Embraced him without much talk. When the fledgling Ventrue did not answer his phone calls and blood was found splattered before the floor of his apartment, Amanda knew what happened and contacted Triabelle, who was infuriated that Lodin would Embrace without the consent of the primogen. In turn, the primogen supported the coup of the Caitiff Maldavis, which threw Chicago's vampiric infrastructure into disarray and forced Lodin to make great amends to the council.

Weatherbottom lived together with Amanda in Cicero, feeding only from her to sate his Hunger. Both are under the protection of the Toreador primogen and Annabelle uses her mortal descendant to manipulate the young Ventrue to do her bidding.

As Weatherbottom did not make his residence in Chicago itself, he was spared from the Lupine attack in 1993. When "Hurricane" discovered SchreckNet around the late 1990s, he cyber-dueled the Nosferatu for years before he formally introduced himself to Khalid al-Rashid, the Nosferatu primogen of Chicago. The SchreckNet community was impressed by "Hurricane"'s skill and his lack of commitment to the clan he was Embraced into, and they granted him access into their web. Weatherbottom has increasingly shown his sympathy for the Anarch Movement.

In Beckett's Jyhad Diary, Weatherbottom is stated to have joined the Anarchs, but whether publically or secretly is not mentioned.

After witnessing the Second Inquisition raid SchreckNet, Bobby became convinced the Camarilla could not face them, and officially joined the Anarch movement. He despises the Second Inquisition and is willing to put aside sect differences to deal them a blow. He is also compiling an online collection of Golconda lore for other Kindred. He is doing this in the hope that reaching Golconda can help him lessen his hunger, and thus prevent him from killing Amanda one of these nights. 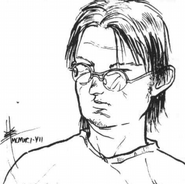