Black Tooth, also known as the Dark Lord, was a midnight-black Simba who nearly exterminated the Ajaba and ruled Africa for a long time with cruelty and efficiency. Even after his fall, he is seen by many Simba as the epitome of their kind, how great they can be and how bestial and cruel they can be.

A direct descendant of Amadu, the most ferocious of the three original Simba, Black Tooth was the most powerful Bastet of the Modern Nights. He was rumored to have slain more of his kind than the Garou managed to kill in the War of Rage. With his pride, the Endless Storm, a highly efficient group of Simba and Kinfolk that had manage to overcome their Bastet-born solitary nature and working together effectively as a team, he ruled Africa for many decades, starting in the late 1970s when he and his pride began successfully lashing out at all European interlopers, supernatural and mundane. Most African Bastet support him. The Ajaba did not, and fought him.[1]

Black Tooth's rise to dominance among the African shifters, however, began in the ending days of the Second World War, when he was in the Umbra and witnessed the spiritual shockwaves from the two bombs dropped on Hiroshima and Nagasaki. He heard the awakening roar of Gorool and the howling of the Fifth Great Maelstrom in the Low Umbra and became certain that End Times had begun. Black Tooth saw omens and tidings in the Tempest that opened his mind to new trajectories and unseen forces, seeing himself a savior of Gaia. It was here that he conceived the vision of his pride, the Endless Storm. According to his own journals, the Fifth Great Maelstrom burned the images of his pride-mates into his mind, some of them long before they were born.[2]When HIV began to spread in Africa, the disease filled the great warrior with an icy horror and an impotent rage. Blaming the other Changing Breeds for forsaking their duties and harming Gaia, Black Tooth declared that he alone would safeguard Africa from all who would despoil it.

The first targets of his wrath were the were-hyenas. Along with the Endless Storm, it was he who used the secrets of the Ajaba to invade the court of the Hyeana King at Ngorongo and killed him, who piled up the skulls of the slain Ajaba and their Kin into pyramids that decorated the court during his final coup in 1984. He managed, however, to keep the Wyrm’s minions in check, as even they feared him, and with contracts made with various vampires he managed to restrain their hold on his continent. He was also fiercely protective of the African wilderness and slaughtered many Westeners who tried to bring their way of life into his domain. So great was his power that he managed to keep a great wyld beast, the Illganwasi baKalahari, the maker of life in Africa, at bay, putting him to sleep beneath the Kalahari desert, lest his awakening would usher the Apocalypse.

Black Tooth found his end when the other Fera of Africa rallied behind a young Ajaba woman named Kisasi, who had formed an allegiance named the Ahadi. The Ahadi have remained since Black Tooth's death, the first Fera coalition since the War of Rage, and try to fight the things Black Tooth kept at bay. 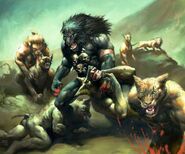 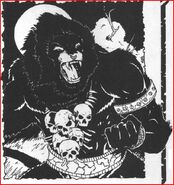 Retrieved from "https://whitewolf.fandom.com/wiki/Black_Tooth?oldid=244548"
Community content is available under CC-BY-SA unless otherwise noted.