Black Lotus, born Nina Barker, is a 10th generation Serpent of the Light and member of the Widows pack within the Sabbat. She looks much younger than she really is. Her delicate frame and innocent face are deceiving, hiding the cruel monster inside.

In life, she was the daughter of a renowned biblical scholar. Her father's traveling left Nina alone, neglected in boarding schools and hotels. When she was 18 she tried to get her father's attention with suicide attempts, older men, and drugs, but none of it turned her father away from his work.

She was found by a Serpent of Light lying in an alley after being raped. The vampire was impressed by her state of degradation, so he Embraced her. When Nina returned to her father, she used Dominate to strip him of all his memories until he was an empty shell. She moved to Montréal and met with Creamy Jade and The Rose, offering her father to them as a gift. They welcomed her into their coven and Nina has gone by the name Black Lotus ever since.

Nina takes pleasure in destroying memories from her customers at the brothel she works at, especially from educated men. Because of this habit to destroy knowledge, the Kindred scholars of Montréal would like to see her meet Final Death.

Path of Power and the Inner Voice 6 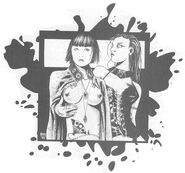 Creamy Jade and Black Lotus from Montreal by Night. Art by Christopher Shy
Add a photo to this gallery

Retrieved from "https://whitewolf.fandom.com/wiki/Black_Lotus?oldid=209385"
Community content is available under CC-BY-SA unless otherwise noted.