Black Dog is a division of Pentex, and produces roleplaying games. They're best known for their Talespinner System games set in the Romantic-Rage setting of the World of Shadow.[1][2] 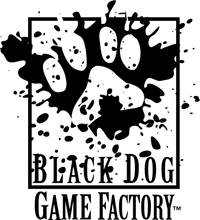 Black Dog affect that their games are much cooler than other RPGs, because they're not geek romps through Arthurian landscapes or nerdy interstellar politics, but set in the modern era. In truth, most of their plots and characters are lifted directly from Terry Brooks novels and Star Trek.

As the Glass Walkers fall to the Wyrm, and they follow the dictates of the Pentex Corporate Father, one of their tasks is to get published a catastrophic series of events in Black Dog's major game lines.[3]

World of Shadow games include:

Black Dog also released a "Tome of Unification" which would allow you to create your own hybrid character, assuming you'd already purchased all of the above games.[1]

Troika Games had radio ads for Frankenstein: Breadlust, which may have been a World of Shadow game (despite Frankensteins not being one of the known game lines).[4]

Testaments to these individuals remain enshrined within a frame of cracked Plexiglas, and stained by unknown humors. An etching on the tiny monument reads, "Gone but not forgotted. Bitch."

Players
Add a photo to this gallery

This article is incomplete.

This page has been identified as lacking essential detail, and as such needs attention. Information regarding expansion requirements may be found on the article's talk page. Feel free to edit this page to assist with this expansion.
Retrieved from "https://whitewolf.fandom.com/wiki/Black_Dog_Game_Factory_(Pentex)?oldid=243294"
Community content is available under CC-BY-SA unless otherwise noted.