Start a Wiki
watch 01:50
The Loop (Games)
Do you like this video?
Bishop Vick is the leader of an apocalyptic vampire faction, the Brotherhood of the Ninth Circle, and a minor antagonist in Vampire: The Masquerade – Bloodlines. He was destroyed by a hands of fledgling in 2004.

While Vick hates his vampiric nature and wishes to destroy everything, he is very competent in using vampire Disciplines . At some point in the past, Vick was Embraced by an unknown Toreador vampire. This Embrace left Vick with a trauma and a warped worldview. He is the final Brotherhood boss, in quest A Plague for the Angels, after his disciples Jezebel Locke and Brother Kanker have been killed. And, like them, he will try to convert fledgling to the Brotherhood. The protagonist cannot, however, comply. After the refusal, he will try to kill the fledgling with his Disciplines and his brainwashed zombies. 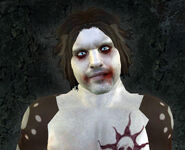 Add a photo to this gallery
Retrieved from "https://whitewolf.fandom.com/wiki/Bishop_Vick?oldid=241730"
Community content is available under CC-BY-SA unless otherwise noted.