Bindusara is a Cainite scholar from India.

Known for his legendary feud with the Mnemosyne, a bloodline of Caine-worshippers who devote themselves to the study of the first vampire and the Book of Nod. He is also hunted by Jocastians, another bloodline of scholars, but ones who use more diabolic means to enlightenment.

Bindusara was born around the time of Chandragupta Maurya in Pataliputra as a member of the Kshatriya caste. Neither his sire nor the circumstances of his acquaintance with the young warrior are known, but as Tshandragupta's grandson, Ashoka, ascended to the throne and founded his first great Indian empire, the Ventrue methuselah was already at his side.

He did not concern himself with the political intrigues of the time for long and left India for the occult secrets of the world. He reached the Roman Empire and there watched over historians. He traveled more than most of the others of his clan, undertook and financed excavations, and invested in the endeavors of grave robbers.

At Erciyes, he studied the Book of Nod with the help of the Cappadocians. In Egypt, he visited Neferu's Fire Court to find answers to his questions. While many Kindred claim the Ventrue to be motivated only by lust for power, they could accuse Bindusara of being dominated by his thirst for knowledge and understanding.

Today, Bindusara resides in Alexandria, studying the patterns of the Jyhad and the omens of Gehenna. He has made enemies within the Mnemosyne, the Inconnu, and Jocastians. 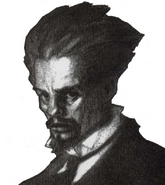