Berel Underwood is the Ventrue Primogen of Boston in the video game Vampire: The Masquerade - Swansong.

In the early 19th century Galeb Bazory met a sugar trader named James Underwood, whose son, Berel Underwood, took over the trade after his father James passed. Galeb agreed to stay and mentor Berel, seeing potential in him. That potential was realized, and eventually, Galeb confessed his true nature. Much like Galeb himself, Berel only became more impassioned and begged to be Embraced. His wish was finally granted in 1869. Berel became ruthless in his affairs after this point. Berel is described as cold, ruthless, calculating — and the biggest mistake of his sire.

One of the most influential, wealthy, and longstanding Ventrue in the city, he has kept hold of the seat for his clan. A former Primogen under Prince Quentin King III, Underwood seamlessly shifted loyalty to the new Prince when she took power. 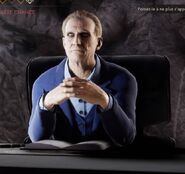