Balam are werejaguars, one of the nine tribes of the Bastet shapeshifters in the Classic World of Darkness.

The Balam are mainly South and Central American werecats favor their ancient heritage, though some Amazon warriors adopt modern weapons to wipe their foes off the earth. The embodiments of wrath, Balam are temperamental, hardy, and xenophobic. What they don't like, the Balam attack, and they don't like much. The Khan may be the chosen warriors of Seline, but the Balam are by far the most aggressive of the Nine Tribes.

Like the Bagheera, Balam are born black or yellow. Black jaguars tend to be women, but both colors claim strong birthrights. Black cats command the powers of the Moon, while their brighter siblings carry greater wrath in their hearts. As most Balam come from hardy South American stock, they favor Mayan Jewelry, Incan body art and modifications (extended earlobes, body paint, flattened foreheads, pierced tongues, etc.), and archaic clothing. Nearly all have teeth filed into sharp points, even in Homid form. Few Balam are Caucasian - the Rotted Hearts have caused too much damage to forgive. Although many Balam use archaic weapons, modern firearms fascinate them, both for their precision and for sheer destructive power.

Bastet presents Tribal weaknesses in the form of Yava for each of the nine Tribes.

Among the region's native people, the Balam hold an ancient place in folklore and religion. Legends claim the single tribe extends from two ancestral families. The Olioiuqui were spiritual travelers, winged werecats who stepped into the spirit worlds and granted visions to those who obeyed the gods. These jaguars taught Olmecs, Aztecs, and Mayans the ways of war, and accepted bloody sacrifices in return. Their stealthy cousins, the Hovitl Qua, cultivated the ways of invisibility and purification. Patrons of the jungle night, these mystical cats could dim the sun and awaken the forest with their arts. To the people of the rainforest tribes, they offered hunting lore and trips into the spirit world.

Both tribes claimed the right of sacrifice from their followers, and both got what they wanted. Warriors among the pre-conquest peoples dedicated the hearts and heads of their enemies to the jaguar gods, who assume grand places in their pantheons. The Olioiuqui themselves walked as gods in the streets of Tenochtitlán, Xicalango, and lost Atloxtila, calling rain and culling the lawless. The Hovitl Qua wandered alone, calling mystics and hunters to play deadly games in the night. Those who returned were considered touched by divinity; very few did so.

Then the Spaniards came, bringing diseases, new spirits, conquering wizards, and worst of all, Garou. Rash Olioiuqui died by the hundreds, and their descendants fled into the jungles. There, they mingled with their Hovitl Qua cousins, who had their own problems. Sickness raced through the forests, poisoning the night cats' people and killing the cat-gods themselves. Wolves came from the north and east - Silver Fangs, Black Furies, Bone Gnawers, and Uktena - and began a new war of Rage in the jungles which had escaped the first. The jaguars, never social to begin with, turned on their siblings, and both tribes were virtually extinct by 1600.

The survivors were wiser than their parents had been. Establishing a new tribe, the Balam, they recalled the old litanies, retreated into the jungles, and created a code called the Flore Ki Wenca - "the Blood of Two Hearts". This covenant declared an end to the old tribal rivalries, set up new territories, and promised that Balam would always aid each other in need. Two Balam, the war chief Six Birds and the healer Blue Morning Skies, called on the great totem Night Jaguar to bless the tribe. This partnership of two shattered tribes is remembered in the werejaguar honorific "Two Hearts", a title they alone can claim. To this day, the tribes' descendants resent the white invaders - whom they call "Rotted-Hearts" - for forcing two to become one.

Once the Flore was sealed in a blood rite, the Balam scattered and set up new Den-Realms. For several centuries, no one disturbed them. This peace ended as human settlements and firms began cutting through the rain forests. The jaguars have not been amused. Today, the Balam fight a war on two fronts; in the cities of Central America, they struggle with the corruption that has come with the newcomers' ways. In the rain forests, they war upon Pentex and other agents of destruction. Despite their impressive magics and war savvy, the jaguars are losing. They're too few, too fractious, and too independent to organize as a tribe, and so they fall. The invaders - human, spirit, and Garou alike - are too numerous to be driven away by a single Balam or a small war party. Fierce as they are, the jaguars are outgunned, outnumbered, and outclassed.

The saddest thing about this siege mentality is that the Balam have a beautiful culture underneath the sheen of blood. Their rites, often practiced alone, involve melodic songs, devoted prayers to the ancestors, and hallucinogenic vision quests. In their Den-Realms, the Balam recall their rich heritage in elaborate artwork that only Umbral travelers can see. Those werejaguars who've established such homes offer sanctuary to other Balam in need, and always wear some bit of jewelry that ties into the designs they have "at home". These tokens represent the ties between the jaguar, his land, and his ancestors. In many ways, they're symbols of the jaguar's soul. The fact that many Garou and Pentex formori in the Amazon War take Balam jewelry as trophies infuriates surviving jaguars, who make sure to reclaim Two-Heart honor in Rotted-Heart blood.

Like any culture in search of its identity, the jaguars treasure secrets about their ancestors - language, artwork, cultural details, etc. Some gravitate toward their human roots and built collections of Aztec, Mayan, Olmec, and Toltec lore; others wheedle secrets out of the spirits who walk beside their people. Some commune with the animal spirits and ignore their human ties completely. All Balam, however, have one common interest: any secret which hurts the invaders.

None, really. In an emergency, a jaguar calls on his allies to deliver a plea to other Balam in the name of the Flore Ki Wenca. This cry for help might or might not be answered, depending on the situation and the caller's Rank. Occasional war parties come together under stress, but they rarely last longer than a month. The Balam are notoriously fractious; even the most good-tempered werejaguars fight each other at the slightest provocation.

Most Bastet retreated to the rainforests of Central and South America long ago. The founders of the tribe established Den-Realms there, and have left them to successors (often, but not always, family) before their deaths. These Realms, called Tona, feature rich vegetation, healthy wildlife, pure streams, and a strong spiritual presence (in game terms, the equivalent of a level three to five Caern, a five dot Den-Realm or a powerful Node). Naturally, this makes them prime targets for loggers, farmers, Garou, and formori. Many of these ancestral "estates" have fallen to invaders, and this makes the Balam even madder.

Some modern jaguars prefer the cities to the wilds, and others range across the mountains and plains. Sooner or later, a Balam sets up his Den-Realm and consecrates it to his forbears. From that point on, he rarely leaves the place for long. The average jaguar will sooner die than leave his Den-Realm to be destroyed; those who do are considered a disgrace to the tribe, and are shunned by their people.

Balam place great importance on honor and family. The cultures from which they come stress strength under pressure, personal responsibility, and family honor. While the jaguar themselves don't get along with each other, many choose lifetime mates from the local humans and cats. Many tales tell of a jaguar who came in the night to lure a young man or pretty girl away from their village. Such people are never heard from again - the Balam take their mates to the Den-Realms and give them whatever they desire.

Despite their ferocious temperament, the Two-Hearts are extremely affectionate to their loved ones. A mate, human or animal, is pampered and protected for the rest of her life, and the children are raised with love. The tribe's haunted history breeds a desperate attachment to the family: once bonded, a Balam never strays.

Bloodlust aside, most Balam revere the spirit world. Many use natural hallucinogens to bring them vision-trances, coveting the secret of Walking Between Worlds. Jaguars with territories bond closely with the spirits there, and protect the land from invasion and corruption. In essence, they promise themselves to the land's service, and take that promise seriously.

Balam faces a werewolf in the Amazon 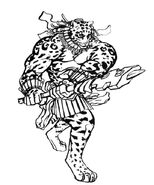 Balam from MET: Werewolf: The Apocalypse
Add a photo to this gallery

Retrieved from "https://whitewolf.fandom.com/wiki/Balam?oldid=239002"
Community content is available under CC-BY-SA unless otherwise noted.