The Bagheera, also known as the Children of Saraam and feared as Kali's Executioners, are Shapeshifters who can assume the form of black panthers.

The Bagheera claim that when Gaia was creating the Bastet, She hoped the Bagheera would be the lawgivers of catkind. This role never fully materialized, but traces of Gaia's intent linger still, filling them with a keen sense of justice and a spirit of righteous wrath that is terrible to behold.

They are renowned for their mystic insights and ferocious tempers. Bagheeras are a strong and sagacious folk, constantly plumbing the depths of Gaia's wisdom even as they fight savagely to rip the talons of Asura from the Earth. Until recently, they have tended to their tasks in solitude, patiently stalking Gaia's foes and meeting only rarely to exchange information and share insights. Now, however, they have taken to working closely with other Changing Breeds, in hopes of bringing the raging multitude of humanity under control and saving their brethren and their Kin from utter annihilation.

The Bagheera are sleek and graceful Folk. While the majority of them have black fur in their cat-forms, some members have spots and yellow-brown fur instead. For some reason, the black line runs truer in women than in men, while the yellow-leopard genes run stronger in the males. An exceedingly rare bloodline has the tricolor markings of the clouded leopard of southeast Asia; these markings favor neither sex - they're just plain rare. Bagheera heads (in cat-forms) tend to be flat and boxy; in human form, they often have strong cheekbones and prominent noses. A werepanther's eyes are said to be the wisest among catkind - even the youngest of them appears to be deep in contemplation.

Of all werecats, the Bagheera are perhaps the most attractive - they're choosy when picking their mates, and have very good genes on both sides. Many favor the arts and sciences, and enjoy high-tech toys or the performing arts. As would travelers, they dress however they please; some prefer the simple garments of Indian villagers while others love ostentatious Eastern designs or comfortable Western fashions. Their choice of weapon and ornaments are likewise eclectic - if making generalizations about werecats is hard, making them about Bagheera fashion choices is impossible.

Traditionally, the Bagheera have been focused on two parts of the world: India and Africa. Over the millennia, they've urged their cousins to end the Impergium, striven for peace with the Silent Striders, Children of Gaia, and Black Furies, and policed their own kind for the Unmaker's taint. When the War of Rage hit, the Bagheera remained one of the few Bastet tribes to maintain stressed and scarce ties to any Garou. During the long conflicts that decimated their cousins, like the Endless Storm or the Nagda-Rackbur conflict of the Khan, the Bagheera have kept themselves neutral, but now, a new threat is rising that is not only threatening their kin, but also their home wilderness: Pentex. And the Bagheera have vowed to themselves to put an end to this.

Meanwhile, many of the African Bagheera flock to the Ahadi and have proven to be vital in its formation. Due to their efforts, the Simba of the Mayi'o and the Silent Striders have been accepted into its ranks.

Bagheera remain very loose; most lower-ranking panthers remain in touch with their elders, and often respect any advice or command she might give. Other than that, the cats are left to their own devices unless a war cry sounds. This summons, often conveyed by spirits or through Kinfolk networks, calls a war party, called taklah, together. The Bagheera of highest Rank leads the group, judges the accused, and decides the punishment. Such calls used to take weeks to assemble, but modern communications allow most elders to call a hunt in a day or so. A hunting party of Bagheera is something terrible to behold and is only called on when the guilt of the accused seems to be valid. Afterwards, they will immediately disperse and waste no time on socializing or other communal activities. Bagheera are perhaps the most well-traveled cats of all. Curious and scholarly, they enjoy new experiences and take advantage of modern conveniences to wander as much of the earth as possible. Most panthers go through three distinct phases of their lives: the akari, or "searching"; the pourra, or "foundation"; and the doyala, or "passing on". During the first, a were-panther revels in her new identity. Anything she cares to do she will do with total abandon. The second phase is one of calm and contemplation. The cat finds a serious mate, raises a family and sees to their well-being. Many Bagheera set up semipermanent homes in their pourra phase, and establish libraries and networks of friends. Finally, the cat reaches the doyala stage, where she shares the wisdom and lores she has discovered in her youth. A Bagheera never really stops moving, but she tends to bond more closely with her community than most Bastet do. 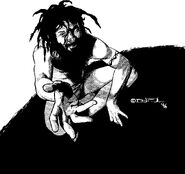 From Werewolf Players Guide.
Add a photo to this gallery

Retrieved from "https://whitewolf.fandom.com/wiki/Bagheera?oldid=243058"
Community content is available under CC-BY-SA unless otherwise noted.