Baba Yaga was an enormously powerful Nosferatu methuselah, over 7000 years old. She was the famous childe of the Nosferatu Antediluvian that was not blood bound to her sire. The Little Grandmother was the upholder of the Shadow Curtain and, some believe, the progenitor of the entire modern incarnation of the Nosferatu clan. 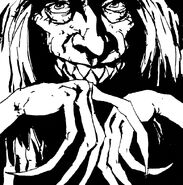 Retrieved from "https://whitewolf.fandom.com/wiki/Baba_Yaga?oldid=236519"
Community content is available under CC-BY-SA unless otherwise noted.