Patriarch of Clan Giovanni
Augustus Giovanni is a powerful Cainite necromancer, the patriarch and leader of Clan Giovanni. He managed to diablerise his sire Cappadocius and became a third generation vampire.

Augustus Giovanni is either the luckiest or unluckiest Antediluvian ever. He diablerized Cappadocius in 1444 CE, and out of his contemporary usurper-diablerists (Gratiano, Tremere, Lugoj, and himself), he may be the only one who truly succeeded. He has built clan Giovanni from a specialized sub-branch of the Cappadocians into the new Clan of Death. He is wealthy beyond conception, his clan is amazingly well-organized, and he stands an odds-on chance of destroying the world.

He is, however, a weakling by his generation's standards because of his comparative youth and his failure to absorb Cappadocius' soul. The neonates of his clan often refer to him as "Uncle Augie" and treat him as little better than a myth. After the failure of the Giovanni master plan to obliterate the Shroud the long-term plans of Augustus and his clan have been cast into ruin.

During Gehenna he is slaughtered easily by (depending on the scenario) the millennia-older and far more powerful real Antediluvians, their methuselah servants, or even a coterie of younger vampires. In the end, Augustus' greed and ruthless desire for power come to nothing in the face of those to whose power he was foolish enough to pretend.

As of the late 2010s, Augustus Giovanni is no longer active in the clan organization. His fate, if he has met it, is unknown; he might be dead or diablerized (the list of possible suspects is long), on the run, or imprisoned somewhere. In any case, the host of wraiths and spectres controlled by him were unleashed on the world, in part leading to the Family Reunion and the formation of Clan Hecata.

These traits are accurate before Augustus commits diablere upon Cappadocius, therefore his generation appears as fourth instead of third and his clan is still Cappadocian.

Movement of the Mind 3, Path of Blood 3, Lure of Flames 2 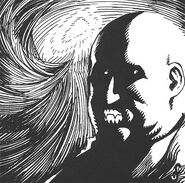